Chichester, U.K. — “You’re not supposed to drive at the marshal,” quipped a young woman dressed head-to-toe in the official Goodwood Festival of Speed white marshal’s uniform. She smiled wryly at 17-year-old Oliver Solberg in the driver’s seat, only half-joking about his rather enthusiastic approach to the starting line. I sat pinned into the Subaru WRX STI’s Recaro bucket seat on my side, mentally preparing myself for the madness that was to come.

Solberg waits for the go ahead to launch, then he begins stabbing the accelerator pedal aggressively. Brap, brap, brap – the acrid smell of burning rubber fills the cabin as the rally car zings to the first corner. The car leans as Solberg flicks it in — it’s tricky as the pavement transitions to gravel mid-corner, so grip is hard to come by here. The abused hay bales on the outside of the corner attest to that. Before we started off, Solberg told me the tires were too warm from previous runs. “I won’t be able to push,” Solberg said matter of fact-like. Taking it easy isn’t a Solberg trait, though, and I learned that quickly.

Perhaps the Goodwood Forest Rally Stage isn’t what you think of when someone mentions the British motoring event. Instead, you picture hay bales lining a picturesque driveway with fancy people in hats drinking champagne and cheering at the jaw-dropping, ear-piercing metal racing by them. The rally stage is not this. In fact, I’d wager to say it’s the complete opposite of the traditional hill climb. Dirt and dust fill the air and lungs. There’s a fair bit of hiking on uneven ground involved for spectators. Drivers lose control of their vintage rally cars and smash them into things. Hell, there’s even a jump. Subaru brought us here specifically for us to experience what going up the rally stage in its new STI rally car felt like with a proper racing driver behind the wheel, and boy are we glad to have done it. 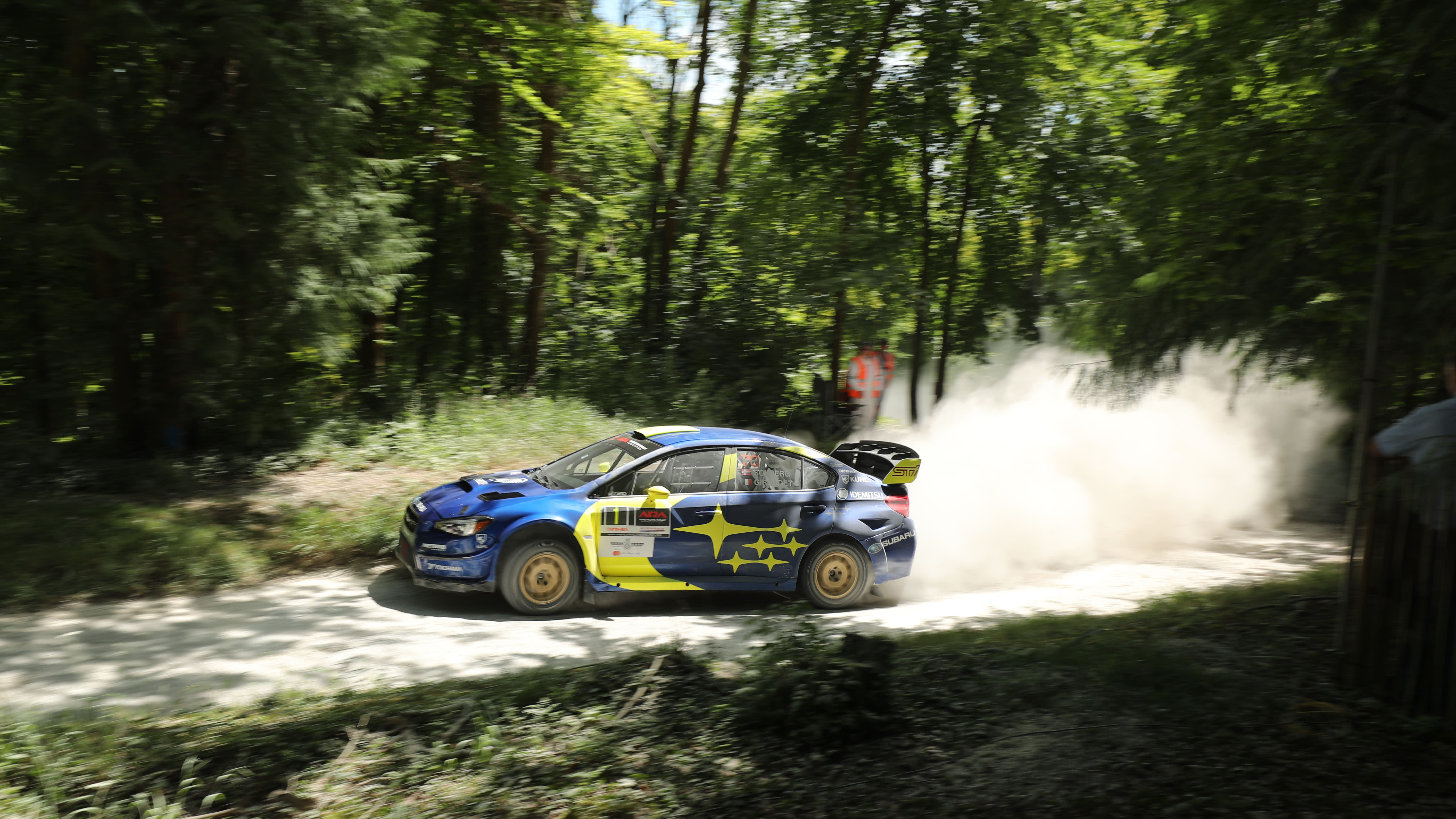 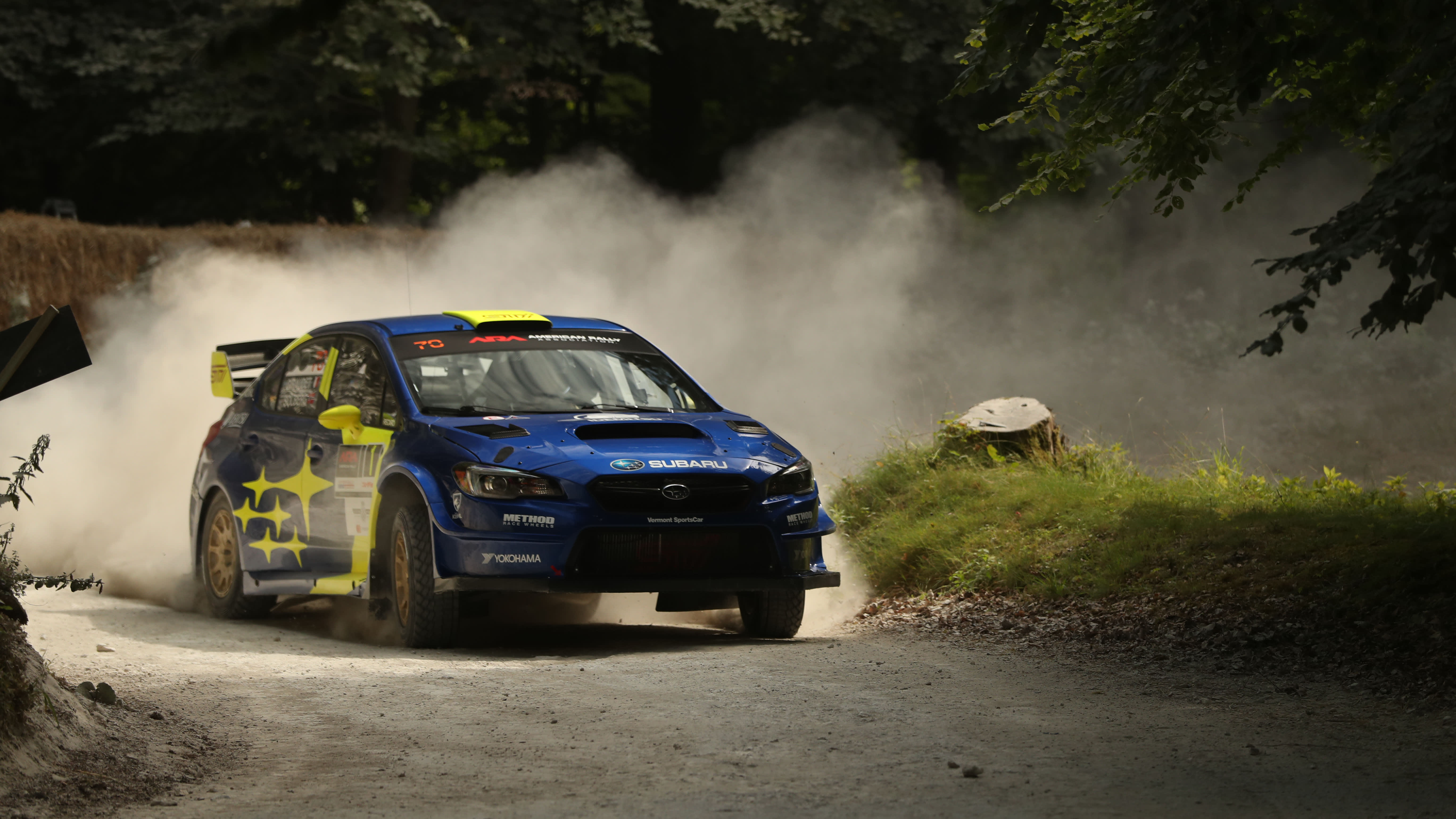 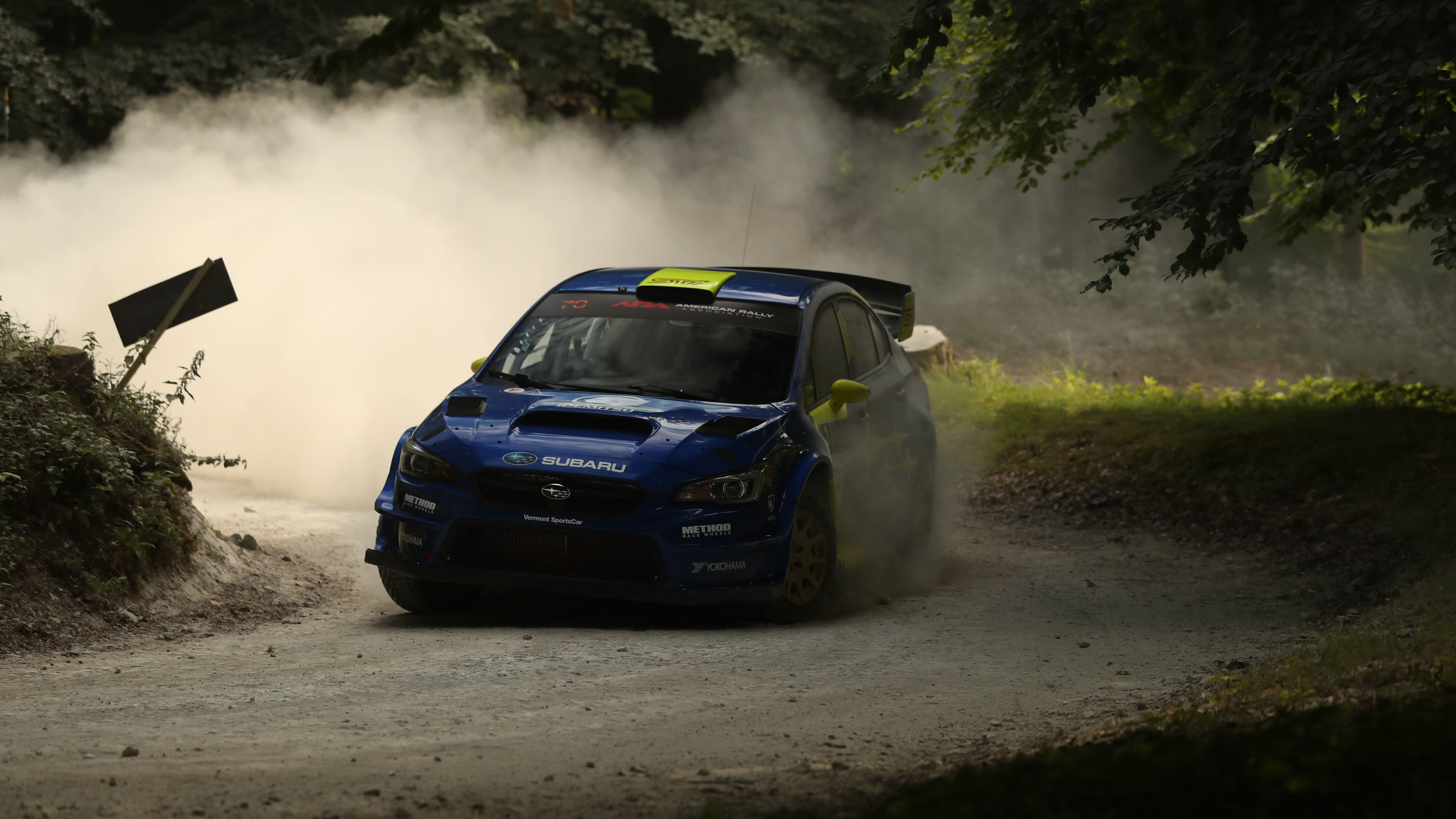 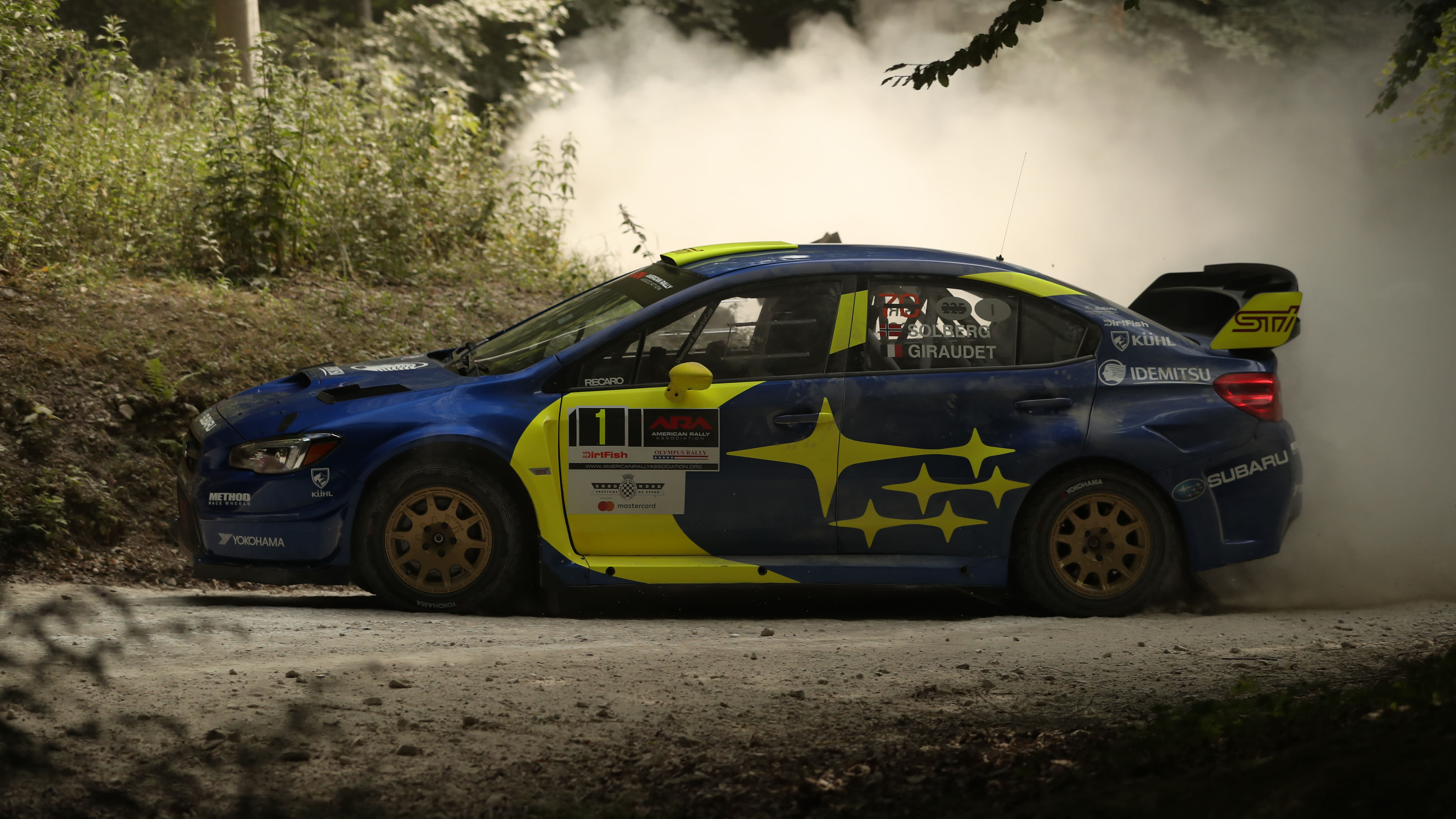 The 17-year-old son of rally legend Petter Solberg may not seem like the pro driver you’d expect, but racing drivers seem to be getting younger and younger these days. Just look at the success that Max Verstappen has enjoyed in Formula 1 since he began. His father was a Formula 1 racing driver before him, and Oliver is similarly pursuing the same career as his father.

“I always dreamed of driving rally cars,” Oliver Solberg said while gathered among media at Goodwood. He certainly enjoys racing up the rally stage, too. “It’s very, very technical. It’s a fun challenge to have. You have a lot of different stuff, jumps and narrow sections, and you have the slippery stuff also, so you learn a lot from this kind of experience,” Solberg said.

Petter Solberg is an extremely proud father, and he knows how much all of this means to his son. “The dream for him is to go with Subaru and that color scheme again. You have no idea what that means to him. That color and the stripes from the last race I did … you know he’s born with Subaru. He still has the bedsheets. Full Subaru bedsheets. And Subaru to sign him. It is just strange and crazy what is happening,” Petter Solberg said.

The kid is fast. Scary fast. Taking on the rally stage is no joke for Solberg. Many trips up the Goodwood driveway tend to be ceremonial in nature, whereas every driver at the rally stage is pushing it to the edge. Even the vintage, valuable stuff like the Lancia Fulvia or Impreza RS catch massive air over the jump.

Solberg does a huge amount of driving with only one hand. While the left hand is glued to the steering wheel, his right is slapping the gear shift up and down on acceleration and braking, then modulating the hand brake throughout the corners. The car accelerates so quickly, and the gears so short, he just has to keep grabbing the next gear as trees fly by inches from the car. Before you know it, the next corner has arrived, and Solberg performs another perfect Scandinavian flick.

Describing how fast the Subaru is in words doesn’t do the car justice. The turbocharged flat-four makes about 330 horsepower and 400 pound-feet of torque and is limited to a minimum weight of 2,900 pounds. Subaru is racing it in the American Rally Association’s 2019 National Championship series this year, and it’s brought back the classic blue and gold livery for it. This car isn’t even close to as fast as it gets either. A WRC car would do this course quicker, but the thing holding Solberg’s car back most is its size and weight. Oliver said as much to us, remarking that a smaller car would be ideal for this particular rally stage. 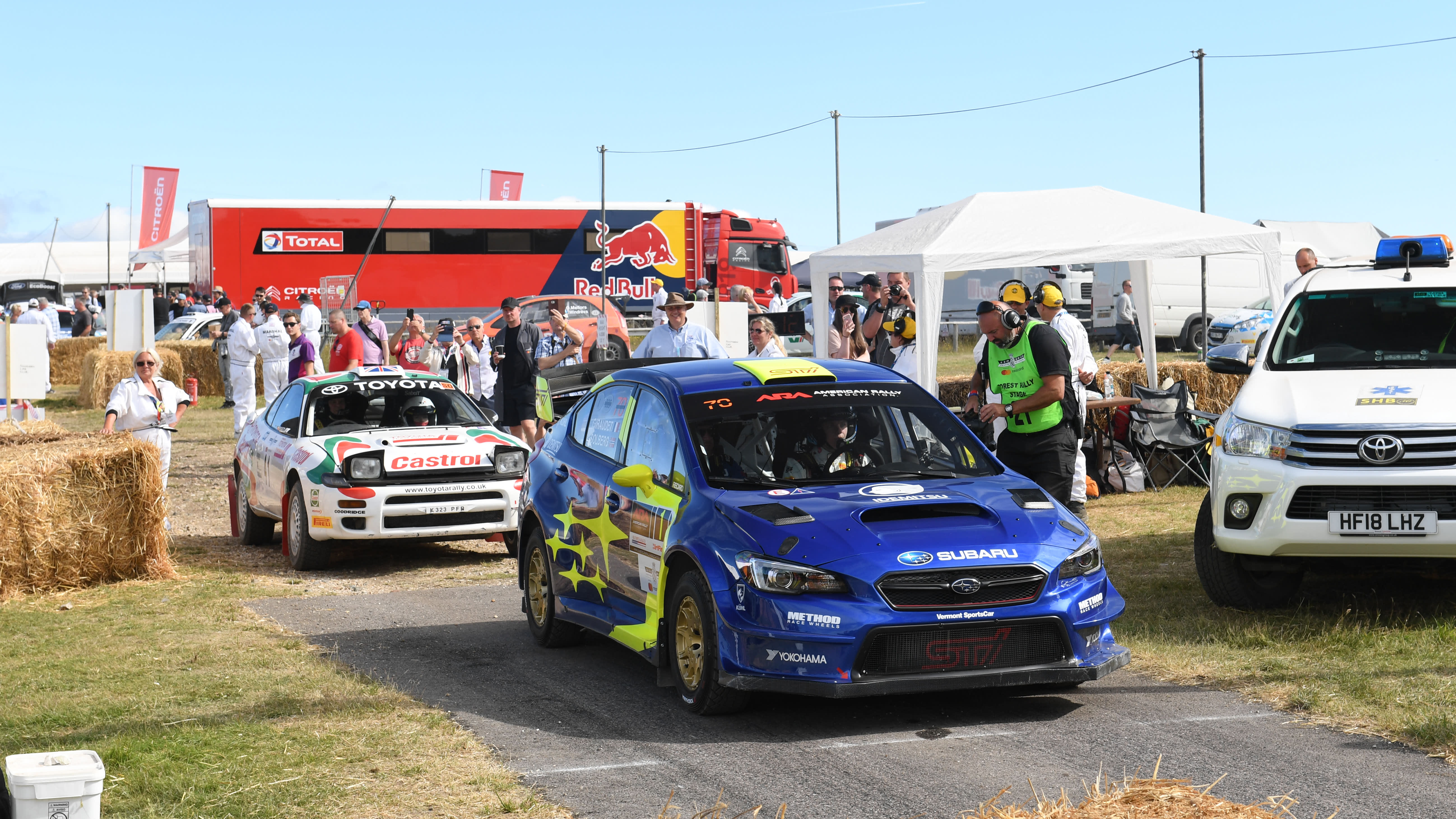 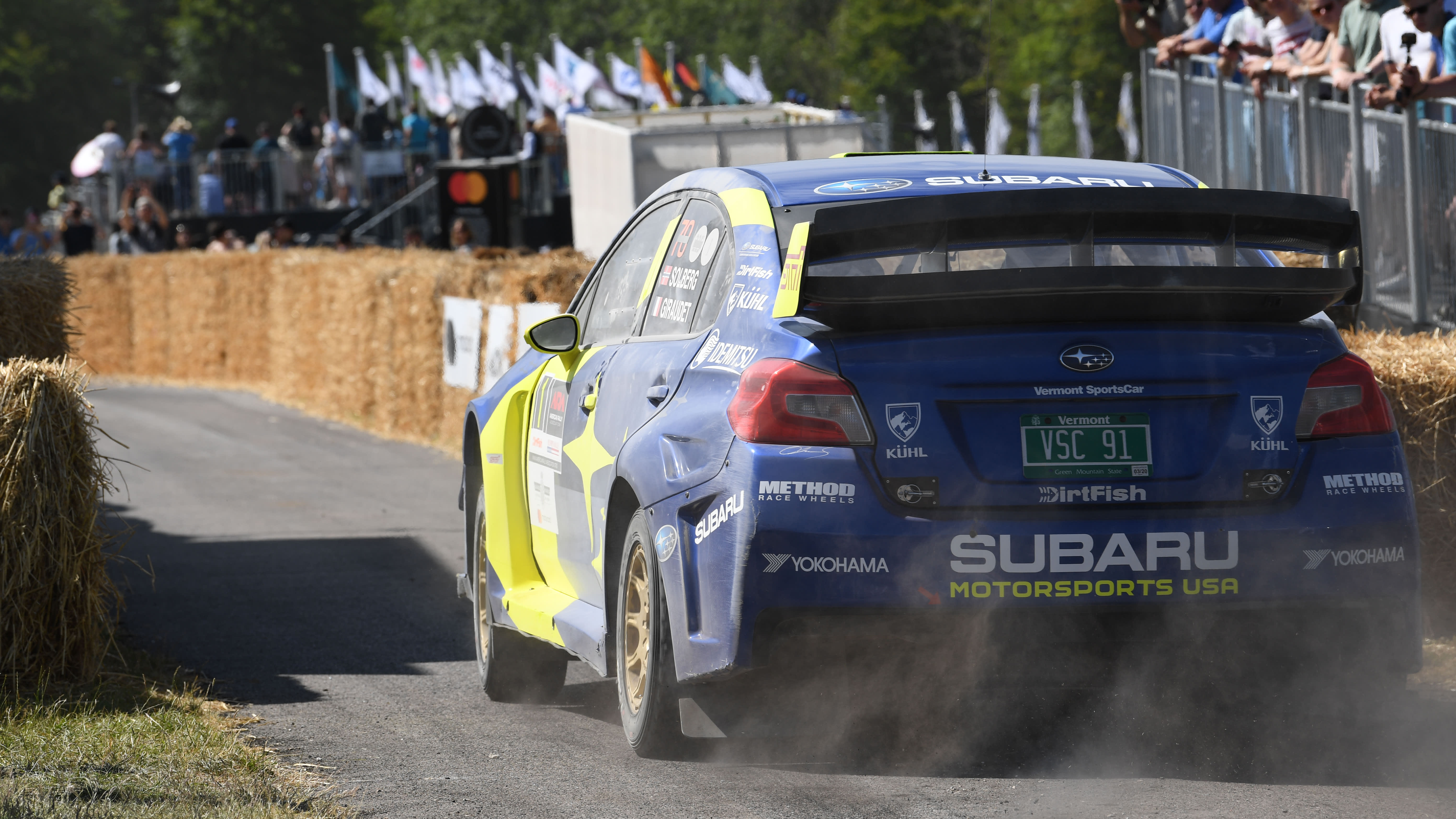 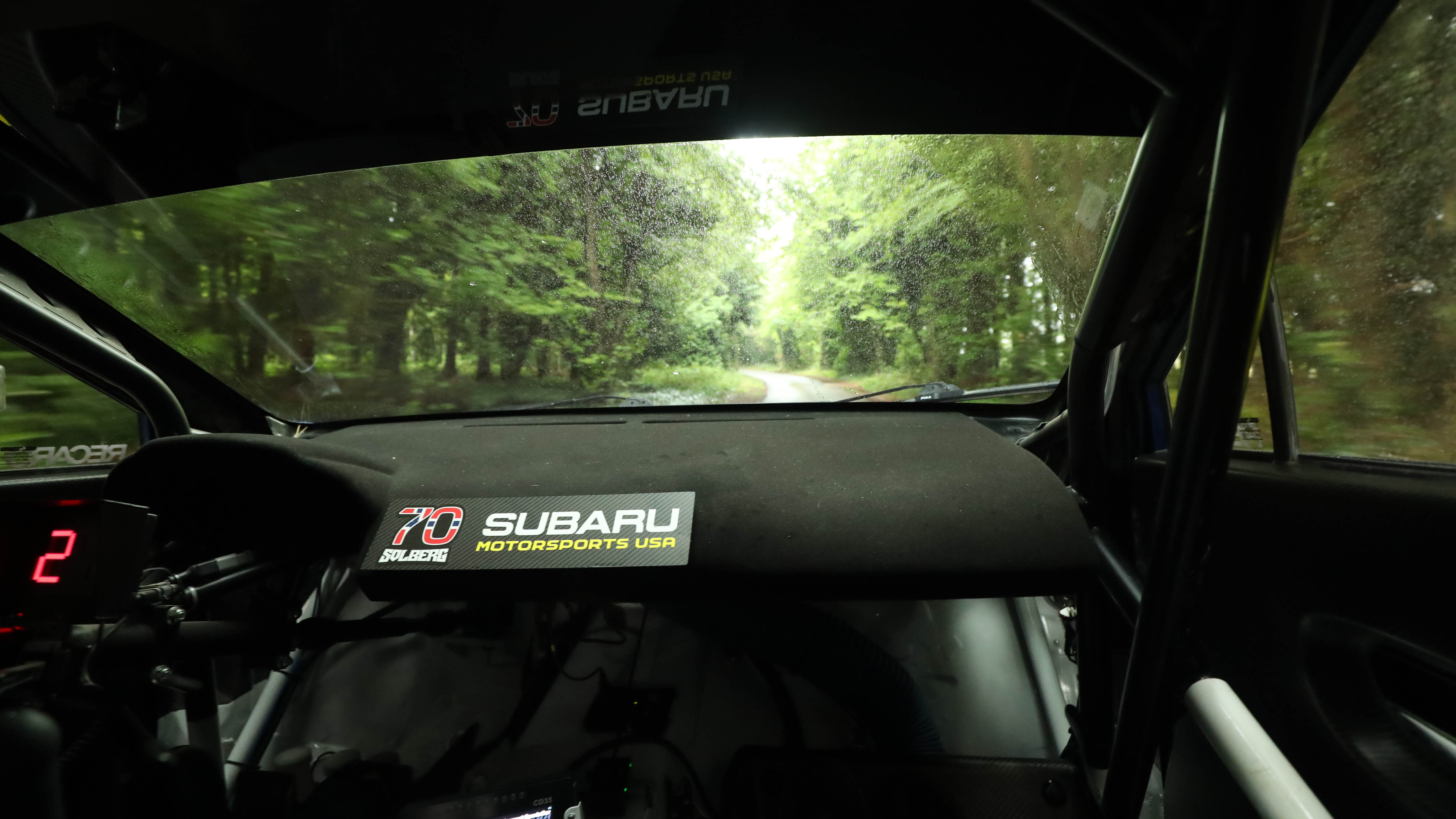 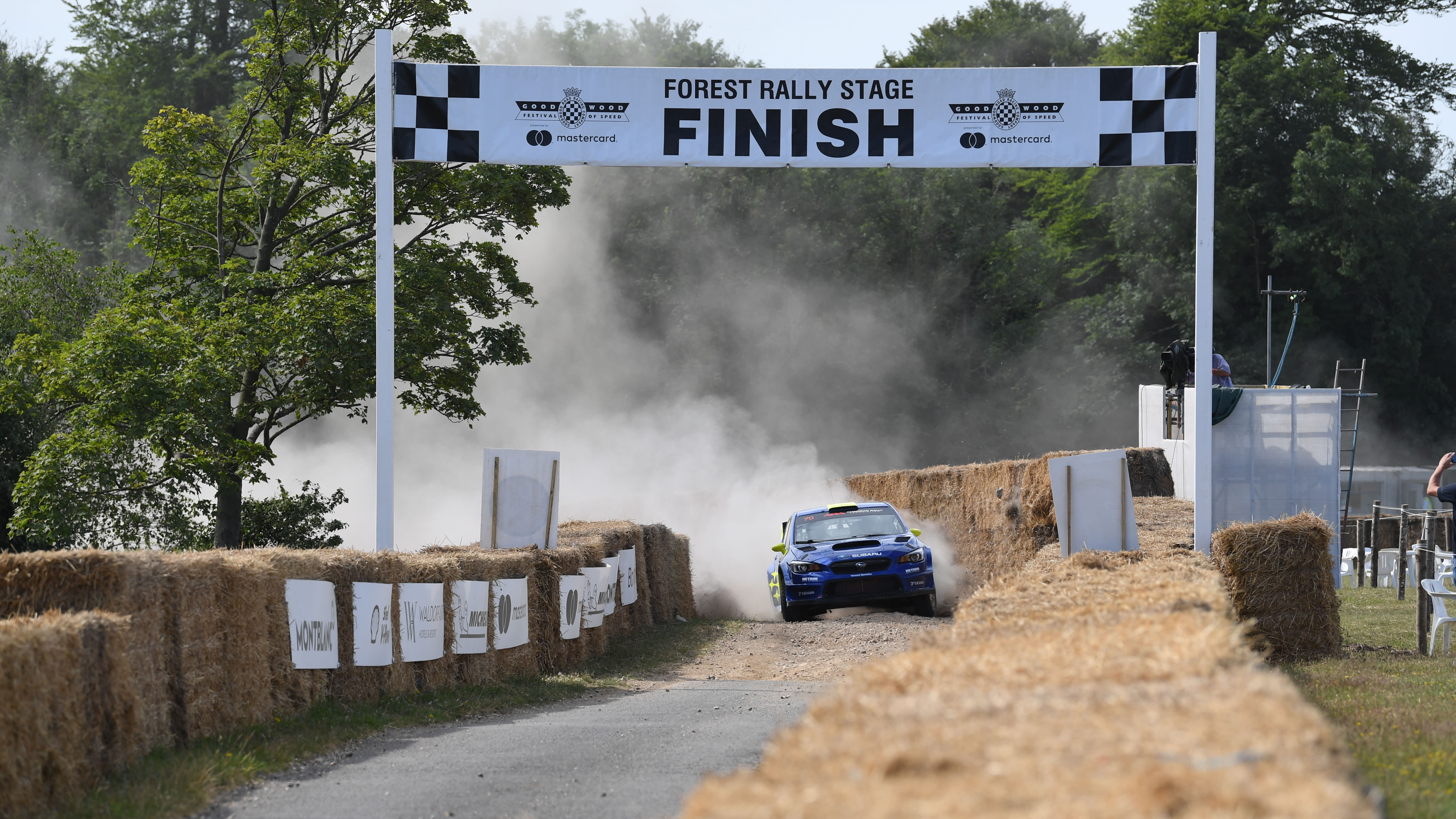 I noticed the only place the Subaru seemed to struggle for time was in the tighter, longer corners. Solberg may have left a few tenths on the table on account of his overheating tires, but he was still whipping it around like a man possessed. Watching from the sidelines and being in the car going sideways throughout an entire corner are two entirely different things.

Inside the car, my mind is trying to process a million different things at once: That’s a sharp corner coming up. The cameraman looks like he’s in a perilous position here. Oh look, more trees. Pay no mind to those; we’re moving too fast for them to completely register as a threat. There’s a giant dip. Well, looks like we’re taking this flat out. It tastes like there’s sand in my mouth. Oh, that actually is sand, because I’m in a rally car.

Trust is everything here, and Solberg certainly has it down better than any other 17-year-old I’ve ridden with. “Here’s the jump,” he quickly warns me. Everything feels rather light for a split second as we shoot through the air, all four wheels suspended above the ground. Then the moment we come down, Oliver has his foot to the firewall and we’re flying once more, only on the ground this time.

We crossed the finish line with haybales on either side of us, making it impossible to see anything else. Solberg pulls over and the marshal hands me our time slip. It reads 2:34.61. Oliver is a happy camper, because this was the best time he set all day. It’s also his last run up the rally stage today, but there were plenty more throughout the weekend. The last run Solberg took in a Citroen DS3 WRX rally car, and it was up the hillclimb on Shootout Sunday, not the rally course. That didn’t stop him from stunning everybody looking on as he set an absolutely blistering time. Oliver was a true crowd favorite, too, as he spent half the hill sideways, shaving corners and just looking like a total badass in general. His father Petter went up in a VW Polo WRX rally car right behind him and beat Oliver’s time by a little over a second. Dad wins today.

We’ll have to circle back around to this moment years from now after Oliver gets his opportunity at a full racing career. The now 17-year-old is good. Goodwood is great. And the rally stage isn’t something any racing enthusiast will soon forget.