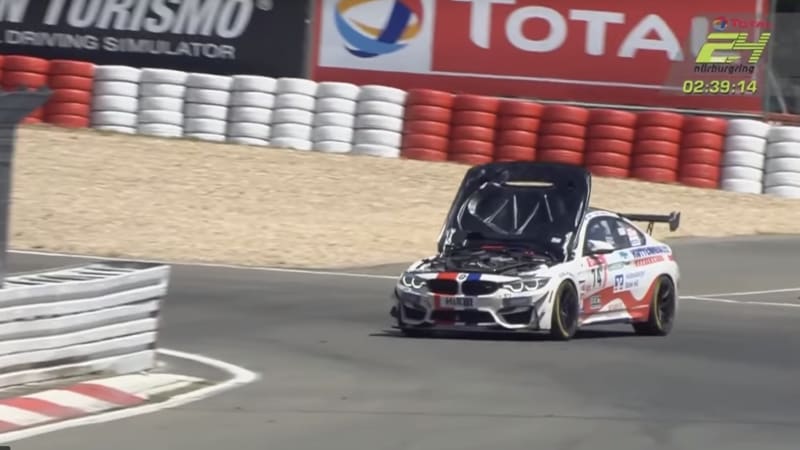 It’s endurance racing season, folks. Or, at least for the

it has been. This past weekend’s

that led most of the race. However, there were plenty of shenanigans and mishaps that went on throughout we feel are worth sharing, from a

in need of a seeing-eye dog, to 200 mph passes on the grass. And the grass is not a good place to be on the Nürburgring.

Starting with the BMW, everybody but the driver is most likely laughing at this one. If you ever wondered what driving with a blindfold on is like, look no further. Amazingly enough, this BMW actually finished the race. It’s amazing what tape will “fix.”

LIVE: The #55 Ferrari goes up in flames dramatically at the 24 Hours Nürburgring as the driver and several marshals attempts to contain the blaze

On the fiery side of things:

. And yes, we’re talking actual fire here. This particular video is worth watching the whole way through, as the horror continues to unfold until the fire is entirely put out. Thankfully, the driver managed to stop the car and get out before the flames became too enveloping, but it was quite the rager.

Tracking back to that pass with two wheels on the grass … now that’s some racing. Can we have more exciting passes like this in another international racing series? Looking at you,

. The audio on this one is worth cranking, as the announcer properly loses it after seeing the pass stick. We feel the same.

A far worse and scary video shows the biggest wreck of the race, involving the #38

. It seems driver Roberto Falcon in the Porsche didn’t slow down behind a field bunched up by an on-track caution. Fortunately, everyone walked away from the crash.

This next video takes the violence down several notches, and is just sort of chuckle-inducing. Someone trained a camera at just the right spot to watch the whole field catch air going over a dip in the track. Nothing special happens, but it’s still fun to watch the cars hop into the air for a brief moment before they have to get hard onto the brakes upon touchdown to make the next corner. Everybody gives the brakes a short tap before taking off and then once more when they’re back on the ground, some a bit more bravely than others.

Last but not least complete this sentence: The Manta returning to the track in the final minutes of the #24hNBR 2019 = the greatest COMEBACK since… 😁
🤔 pic.twitter.com/lu1l4eWrak

Manta’s story and return to the race. The classic racecar did in fact take part in the race, but it was knocked out early by a crash. With the help of mechanics from other teams, they were able to get it back out on track before the end of the race, allowing the Manta to finish on its own power. It’s the kind of feel-good story we can get behind in racing.