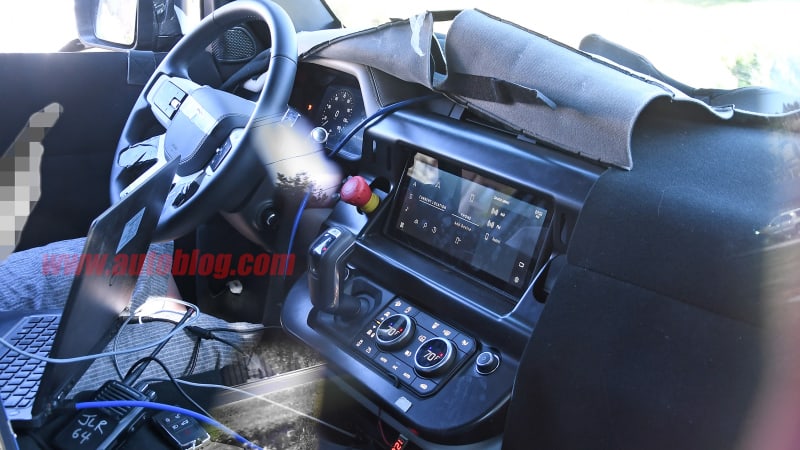 UPDATE: A photo has surfaced on a Land Rover fan Instagram page called landroverphotoalbum that shows the exterior of the four-door Defender in the instrument panel. Automobile Magazine previously reported on the photo. We’ve embedded the image in this post and updated the text to include it.

A few months ago,

of a Defender prototype that give us a clear look at what’s in the luxury SUV, and they match up pretty much perfectly with the leaked photo.

The dash design is chunky and chiseled, emphasizing the SUV’s utilitarian history and focus. The shifter is also up on the center stack, as expected by the leaked photo, which frees up space for center storage or even room for a front bench seat. We can just barely make out the air vents up on the top of the dash. The steering wheel is also the unique piece we haven’t seen in other Land Rovers, yet.

The instrument panel is clearly a screen, too, and in another photo shared by Instagram page

, the screen reveals the design of the four-door Defender. The design is very clean and lacking much in the way of creases and hard lines. But it’s still very boxy, it has a contrast color roof with a floating design meant to evoke the old SUVs. It also appears to have extra available skylight windows in the back like on old Defenders.

Back in the Defender’s interior, we also find there’s only one center screen for infotainment, and the climate controls are operated with buttons and knobs. The climate controls are right next to terrain management and ride-height controls, and it looks like the knobs may be multi-function. A pair of buttons sit between the knobs, one of which points to the left one with some sort of terrain symbol, and the other is a fan symbol pointing to the right knob, both of which suggest alternate uses for the knobs.

Aside from the interior, we also get a good, close look at the Defender’s new fully independent suspension. These close-up shots reveal that the SUV will be available with air suspension. We also get more looks at

of both the two-door and four-door models, both of which have tailgate-mounted spare tires.

finally be revealed at the Frankfurt Motor Show this September

prototype also showed some interesting off-road equipment including a brush guard and a hidden winch.