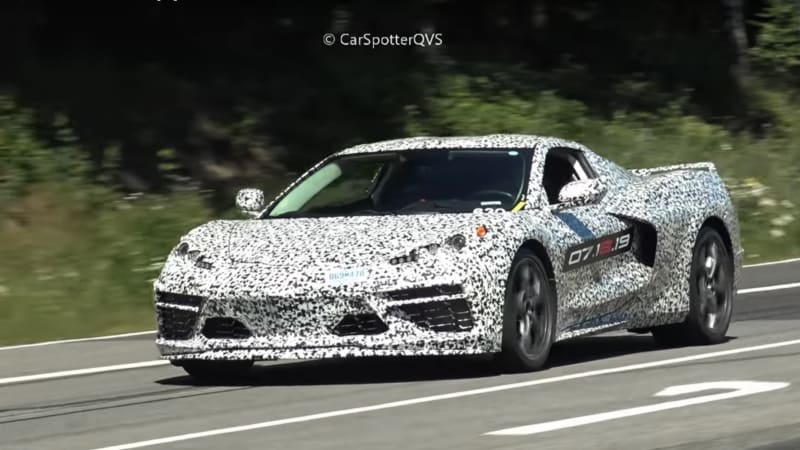 YouTuber CarSpotterQVS filmed a couple of C8s testing near the Nürburgring, where Chevrolet is honing the midengined Corvette. At this point, there’s not a lot left to the imagination, since we’ve seen the C8 a lot and caught many of its important details through spy photos and a “leaked” ordering guide of questionable veracity.

This video gives us lots of close ups of two C8s, both sporting lots of camo and provisional light arrays but with a lot less covering than we’ve seen in some past photo sets. The cars’ massive rear quarter ducts are on display, feeding air to what are presumably coolers and air intakes for the V8(s) under the rear glass. Up front, the lower fascias are slightly different, perhaps signifying a different brake cooling duct arrangement, as Twitter user @hoonable points out in a worthwhile analysis. You can also see the grille mesh looks a bit like what’s on the Camaro SS.

Inside, we get a great view of two different layouts for the digital gauge cluster. One is topped by a horizontal bar tach with separate square panes for additional information, likely a “track” mode similar to the C7’s but abandoning any pretense of simulating analog gauges. The second layout, with a central speedometer flanked by two panes for more information, looks more like a “tour” or “eco” mode configuration. Either way, the dash clearly confirms that the C8 will have a V8 engine and an automatic transmission.

A few other observations: it appears the nose of the car lifts up, something that many supercars with height-adjustable suspensions have. The “nose lift” function helps keep the front splitter from getting demolished by speed bumps and the like. The tires appear to be Pilot Sport 4Ss in 245/35 ZR19 up front, although we can’t see the rears.

And it’s completely inconclusive, but we can hear obvious turbo whistle as the first C8 exits the gas station, but background noise obscures partly the sound of the second one. That said, it doesn’t seem nearly as whine-y as the first, so it could be that they feature different engines. Perhaps the base C8 will get a version of the naturally-aspirated LT1, after all.

2020 BMW X6 revealed, looking more distinct from X5 than ever before
This might be the ultimate logging truck