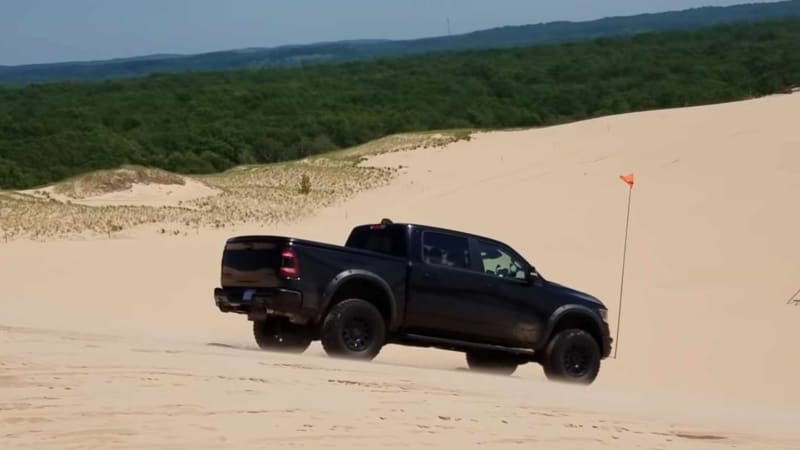 A group of Ram Rebel TRX prototypes has been caught on video testing in Michigan’s Silver Lake Sand Dunes. This marks a change of scenery from our last prototype views, which took place on city streets in Detroit and in Arizona. Jordan Denhoed caught the video from a camera mounted on his truck, following the prototypes through the hills. The type of terrain and the presence of a Ford F-150 Raptor reinforce the idea that no matter what else the production Rebel TRX can do, it wants to compete with the Raptor on the Raptor’s home field.

Denhoed was able to get close enough once to hear the sound of the supercharger working in the 6.2-liter Hellcat V8. Unlike the Rebel TRX concept that was billed with 525 horsepower, the expectation now is that the production version will work up the Hellcat’s typical 707 horsepower and shift through a 10-speed automatic. The power figure might have something to do with the staggered wheel lug pattern on the most recent prototypes — six lugs in front, eight lugs in back. The Rebel TRX proto caught in Arizona in August last year used the six-lug pattern all around.

Other engine details are fuzzy. Motor1 credits an “insider source” with info that Ram has 40 test mules running, 10 of them in white, 30 of them in black, and one of those testers supposedly has an 840-hp Dodge Demon engine under the hood. The same source said the production version won’t use the dial shifter, but a traditional shifter on the center tunnel. At the opposite pole concerning engines, Mopar Insiders reports that the less powerful, less expensive Rebel TR version, using a 7.0-liter V8 with roughly 520 hp, has either been canceled or delayed so Ram can devote resources to the Rebel TRX.

The crew-cabbed prototypes in the video all wear the blacked-out treatment and Laramie Black front ends, fender flares over beadlock-looking wheels, and twin pipes. It’s hard to tell how much lift comes with the remote-reservoir Bilstein shocks since the wheel arches have been cut out to make more room, but the concept had 13 inches of travel. It’s rumored that ARB locking diffs will come on each axle.

Having been promised for showrooms by 2022, it’s likely we have a couple of years to wait we see the Rebel TRX’s final form. We should get our first look at the F-150 Raptor fitted with the Mustang Shelby GT500’s Predator V8 around the same time.