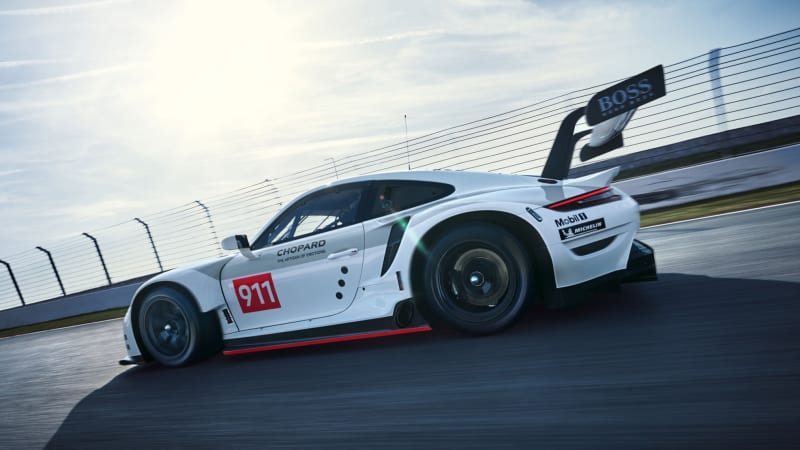 The phrase “if it ain’t broke, don’t fix it,” does not exist in the minds of motorsport competitors, as their pursuit of betterment is never ending. After taking more than 20 class wins and dominating its way to an FIA World Endurance Championship, Porsche has completely redesigned the 911 RSR racer, and it’s improved in just about every way.

When Porsche unveiled the 2017 911 RSR, the major news was the shift to a mid-engined configuration, and that stays the same on the 2019 model.The 4,194-cc naturally aspirated six-cylinder boxer engine makes 507 horsepower, up just a stitch from 503 horsepower in the 2017 unit. It also has a wider rev-band for better power delivery and control. Porsche calls it the largest boxer engine ever dropped into a 911 ex-works car.

The boxer is paired with a six-speed sequential constant-mesh manual gearbox with a magnesium gearbox casing, an electronic shift actuator, and shift paddles on the steering wheel. It has a multi-disc self-locking differential and a three-disc carbon racing clutch, and it routs power to the rear wheels. Increased rigidity should improve shift times and overall powertrain efficiency.

The two exhaust pipes have been repositioned to exit on each side in front of the rear wheels. The shorter exhaust reduces weight and helps with aero, but also allows for a redesigned diffuser. Porsche says aerodynamic efficiency and stability have “increased significantly” and the car now creates more downforce.

The aluminum-steel composite body shell, CFRP body components, and interior have been tweaked, as well. The hood, front bumper, front splitter, and side intakes have been redesigned for better aerodynamics, and Porsche even changed the design of the side mirrors. The 2019 RSR retains its goose-neck pedestal rear wing and duck lip rear spoiler, but the back bumper has been changed to include new side outlets behind the rear wheels.