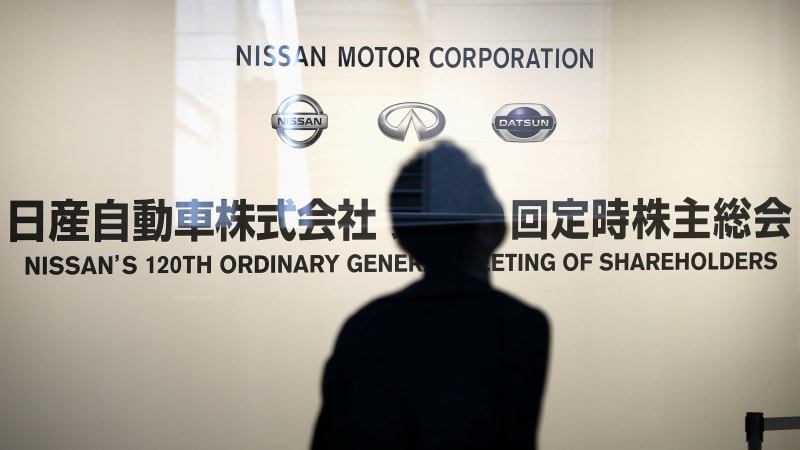 YOKOHAMA, Japan — Scandal-battered Nissan won its shareholders’ approval Tuesday for a new system of committees to oversee governance and for keeping Chief Executive Hiroto Saikawa on its board.

The Japanese automaker’s profits and dividends have tumbled amid a high-profile scandal involving its former chairman Carlos Ghosn. Some shareholders expressed worries about the future of the automaker.

Saikawa and the other board members, including French alliance partner Renault Chairman Jean-Dominique Senard, bowed deeply at the meeting at a convention center in the port city of Yokohama, where Nissan Motor Corp. is based.

“I’d like to offer my deepest apologies, representing the company, for how the misconduct has caused serious concern for our shareholders,” Saikawa said.

Ghosn, who led Nissan for two decades, was arrested in November and is awaiting trial in Japan on charges of financial misconduct, including falsifying documents related to retirement compensation. He says he is innocent.

The proposals to have committees overseeing compensation, board nominations and auditing required a majority of shareholders for a quorum and two-thirds of those voting for passage.

Approval was shown by clapping among the more than 2,800 people present at the meeting. Most of the votes were submitted in advance.

French automaker Renault, which owns 43% of Nissan, had earlier signaled it may abstain, saying it wanted more representation on the committees.

To satisfy that request, the committees have Senard, who replaced Ghosn on the Nissan board, and Renault Chief Executive Thierry Bollore.

Saikawa told shareholders he had “two kinds of responsibility,” for what had happened in the past as well as building toward a future and a recovery, including nurturing his successor.

“I would like to work toward putting Nissan on a stable track,” he said, asking for shareholders’ approval for his remaining as Nissan’s leader. “I want to speed up the preparations for a succession.”

Although Nissan has been trying to put the scandal behind it, many wonder why the alleged wrongdoing, if true, had gone unchecked, and especially how much Saikawa knew. One shareholder asked whether Nissan officials besides Ghosn shared in the alleged misconduct.

For the fiscal year that ended in March, Nissan’s profit plunged to about half of what it was the previous year, partly because of the scandal, as well as problems in the lucrative North American market. The maker of the Leaf electric car and Infiniti luxury models is projecting a further deterioration in its earnings, but promising a recovery for the year after that.

It logged 9.2 billion yen ($83 million) in costs for the fiscal year that ended in March from alleged underreporting of Ghosn’s compensation.

The proposal, which won shareholders’ approval, called for an 11-member board, including seven outside directors such as Andrew House, formerly with Japanese electronics and entertainment company Sony Corp.

For the appointment of directors, a third of the shareholders made for a quorum, and passage needed a simple majority of those voting.

Some shareholders expressed worries about the alliance, and one who stood up to ask a question said the main person who had made decisions, referring to Ghosn, was now gone.