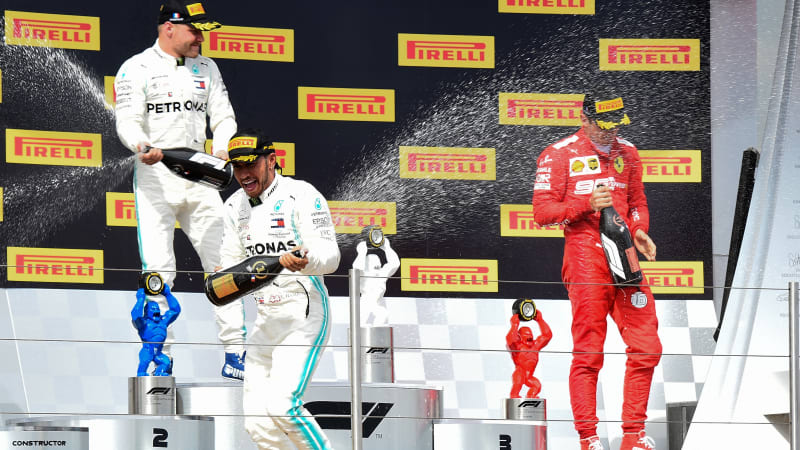 LE CASTELLET, France — Lewis Hamilton put on a display of domination in a processional French Grand Prix on Sunday to go 36 points clear in the Formula One world championship and stretch Mercedes’s winning run to 10 races. On a scorchingly hot afternoon at Le Castellet’s Paul Ricard circuit, Hamilton put the rest of the field in the shade as he led from start to finish to take his fourth win in a row and sixth of the season.

The Briton took the checkered flag 18 seconds ahead of Finnish teammate Valtteri Bottas, who was pushed hard at the end by Ferrari’s Charles Leclerc in a short-lived moment of tension.

While Mercedes celebrated their 50th one-two finish, fans around the world could be excused for stifling their yawns after a race that staked a solid claim for most boring of the year.

“We are creating history together and I’m so proud to be part of this team,” said Hamilton, who also won from pole last year at Le Castellet in a race where traffic gridlock on the roads outside proved more of a talking point.

“It wasn’t easy at all and everything is on the edge. I had quite big blisters on the front two tires – but this has been the best start of the year.”

He has 187 points to Bottas’s 151. Ferrari’s Sebastian Vettel, fifth on Sunday, is now 76 points behind Hamilton — the equivalent to more than three race wins.

Mercedes, heading for an unprecedented sixth straight constructors’ and drivers’ title double, have won all eight races this year as well as the last two of 2018 and look unstoppable.

If they win in Austria next weekend, they will equal McLaren’s achievement of 11 wins in a row in 1988 — the longest sequence of success in the modern era.

Statistics aside, the race was a forgettable one with the top four finishing in the order they started and an absence of controversy after a Canadian Grand Prix that stirred up plenty of heated debate.

Until the closing laps, the main thrill was provided by a brave marshal who darted across the track to retrieve a broken bollard.

Hamilton made a clean start, was 2.3 seconds clear of Bottas after six laps and continued to pull away despite complaining at one point that something had broken on his seat – a gripe undermined by the Briton lapping faster and faster.

He was so far ahead by the time he pitted that he came out ahead of Vettel, who had yet to make his stop.

Max Verstappen was fourth for Red Bull while Vettel, who had started seventh on the grid, pitted on the penultimate lap for fresh tires to snatch an extra point for fastest lap from Hamilton.

“This weekend, the biggest aim was to close the gap as much as possible and we failed,” said Vettel, who has not won for 16 races.

“We have to understand why some of the bits we brought didn’t work and hopefully we can try again and the track layout in Austria next week will go our way.”

Spaniard Carlos Sainz finished sixth for McLaren ahead of Daniel Ricciardo for Renault.

The Australian was later handed two five-second penalties for leaving the track, rejoining unsafely and gaining an advantage, dropping him to 11th and out of the points.

Kimi Raikkonen moved up to seventh for Alfa Romeo with Renault’s Nico Hulkenberg eighth and Lando Norris ninth for McLaren after losing three places on the last lap due to an hydraulics problem.

The final point went to Red Bull’s French driver Pierre Gasly. His compatriot Romain Grosjean, in a Haas, was the only retirement. (Reporting by Alan Baldwin, editing by Pritha Sarkar)