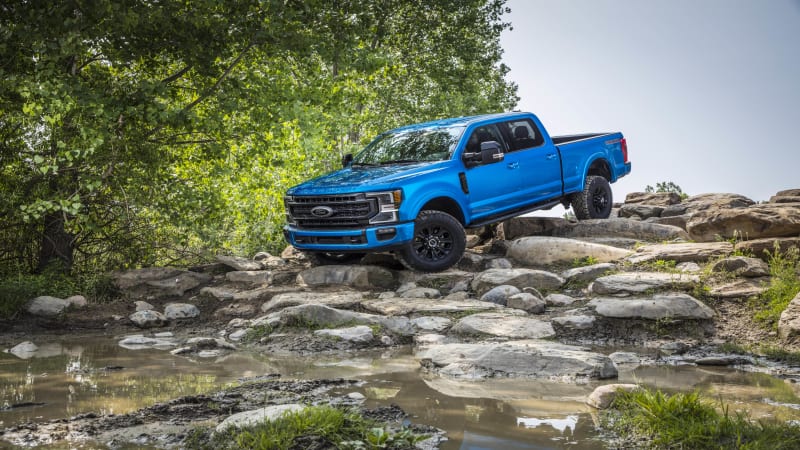 . And there’s a new truck out there as of today, and it’s called the Tremor. More specifically,

is introducing the 2020 F-Series Super Duty Tremor Off-Road package. It’s not an entirely new model, but the Tremor package is a rather comprehensive bit of kit Ford has put together.

You may have fond memories of the

this decade. That was a bit of a sport truck with the standard cab, short bed and 3.5-liter twin-turbo V6 that made 365 horsepower and 420 pound-feet of torque. Ford dressed it up in fancy graphics and a big “Tremor” sticker toward the rear. A version of that Tremor sticker remains, but this truck is very different than the last one to carry that name. That doesn’t particularly bother us, as the Tremor name sounds particularly badass for a pickup.

While the previous Tremor focused on street performance, this one is here to go trail-riding and mudding in. The closest competitor to a Super Duty equipped with the Tremor package is the

. These two heavy duty pickups share a similar purpose, but the Ford goes at it a bit differently. Instead of a single, dedicated model, you can equip the Tremor Off-Road package to nearly every (except the XL

trim level. That means you can get a relatively base F-250 XLT with the package, or a full-on Platinum luxury truck with the same equipment. It seems like a ridiculously niche customer to target, but Ford thinks there’s a market there.

Thankfully, the package is all about function. It starts with a lift, 30 mm in front and 40 mm in back. Then Ford made special dampers that have significantly more oil volume than the standard Super Duty shocks — Tremor logos are visible on those shocks to make sure folks know your suspension is special. They’re tuned to provide a soft ride at low speeds, but still offer control in severe impacts. Modified progressive-rate springs were chosen to provide a compromise between heavy towing tasks and off-roading. The rear stabilizer bar is also specifically tuned for a lower spring rate so as to reduce head toss during severe articulation events.

Duratrac tires wrap unique 18-inch matte black wheels. These, plus the lift, result in 10.8 inches of ground clearance and water fording of 33 inches — the latter bit was accomplished by lifting the airdam by 5 inches. The front axle is unique to the Tremor, and Ford is claiming this truck has the best approach and departure angles of any Super Duty ever. Putting the power down when off-roading should be easier, too. It uses a Dana front limited-slip differential and a locking rear differential. The Tremor also has a rock-crawl mode, optimized for use in 4×4 low. Protecting the body are the front and rear skid plates you’ll find on FX4 models. Additionally, the running boards have been pulled upwards, serving as damage control blockers for the body.

There are a few caveats we’ll point out. Ford said the towing and payload is similar to what it was before the package, but also admitted that both capability numbers will go down. The Blue Oval stressed that it understands Super Duty truck buyers want that capability, so it tried hard to make sure it wasn’t greatly compromised for off-road performance. Also, you’ll need to option either the

to add the Tremor package — it won’t be available with the 6.2-liter gas V8. Finally, it’s only available on crew cabs, but most people opt for the crew cab today anyway.

The idea here is to get folks to buy their Super Duty “pre-modified.” Ford says that many of its buyers do similar things via the

to their trucks shortly after purchasing, so why shouldn’t they buy it direct from Ford like that? It’s also important to keep in mind that this package is nothing like the

. That truck is a high-speed desert runner, whereas this one is a rock crawler that’s still heavily focused on Super Duty tasks. How much will it cost? And how much towing and payload will you lose? Ford isn’t saying yet. It’ll be available when the 2020 Super Duty goes on sale at the end of the year with all

provided several months back. We’ll be able to fill you in on the above details as Ford doles them out to us.