Is hydrogen finally the future of clean energy?

The following is an editorial opinion piece by John Kemp, a Reuters market analyst. The views expressed are his own.

Hydrogen has the potential to become an important energy carrier in a future clean energy system, complementing electricity, but it will have to overcome formidable technical barriers first if it is to fulfill that role.

“Hydrogen has never enjoyed so much international and cross-sectoral interest, even in the face of impressive recent progress in other low-carbon energy technologies, such as batteries and renewables,” according to a recent report by the International Energy Agency (IEA).

Policymakers have taken an interest in

before — following the oil shocks of the 1970s, the climate concerns of the 1990s, and worries about peak oil in the 2000s — only for attention to fade again when oil prices fell and environmental policies switched to other more promising technologies.

But this time could be different, according to the IEA, because hydrogen may be an essential part of the tool kit needed to achieve the deep decarbonization targets policymakers have set under climate agreements.

Plans to reduce net emissions near zero by mid-century, announced by some governments, have put the spotlight on sectors where electricity is not the preferred energy carrier and emissions are hard to abate.

The planned double transition (shifting the delivered energy system to electricity, and decarbonizing electricity generation) may not work in these areas.

Hydrogen may be a better energy carrier in at least some of these applications, according to the IEA (“The future of hydrogen: seizing today’s opportunities,” IEA, June 2019).

Hydrogen could have other benefits, including tackling air pollution and facilitating the clean energy transition while reducing disruption to workers and communities closely connected with fossil fuels.

Hydrogen systems could preserve a future role for at least some production, transportation and employment in the oil, gas and coal industries if they were paired with carbon capture, utilization and storage technology.

Pure hydrogen is mostly used in oil refining and the production of ammonia, mainly for fertilizers, while mixed gases are supplied for methanol and steel production. Pure hydrogen is not yet commonly used as a fuel.

Hydrogen can be produced directly from water by electrolysis, but nearly all the hydrogen currently in use is produced from steam methane reforming or coal gasification.

Electrolysis is the perfect pathway for turning excess electricity from solar, wind and other renewable sources into hydrogen with zero emissions.

By contrast, steam methane reforming and coal gasification are both energy-intensive processes that produce prodigious amounts of carbon dioxide (CO2).

use and 2% of worldwide coal use, the latter mostly in China.

Production accounts for around 830 million tonnes of CO2 emissions per year, equivalent to the combined emissions of Indonesia and the United Kingdom.

Hydrogen could therefore help solve problems of intermittent renewable electricity generation by providing a means of storing energy over time and transporting it over long distances.

“Because hydrogen can be stored and used in a variety of sectors, converting electricity to hydrogen can help with the matching of variable energy supply and demand, both temporally and geographically,” the IEA wrote.

“Without hydrogen a decarbonised energy system based on electricity would be much more flow-based. Flow-based energy systems must match demand and supply in real time, across wide distances, and can be vulnerable to disruptions of supply.”

With so many potential benefits for so many different interest groups, it is no wonder that hydrogen has attracted support from a broad coalition.

But if hydrogen is to live up to that potential it will need to overcome formidable technical problems around production, distribution and storage. 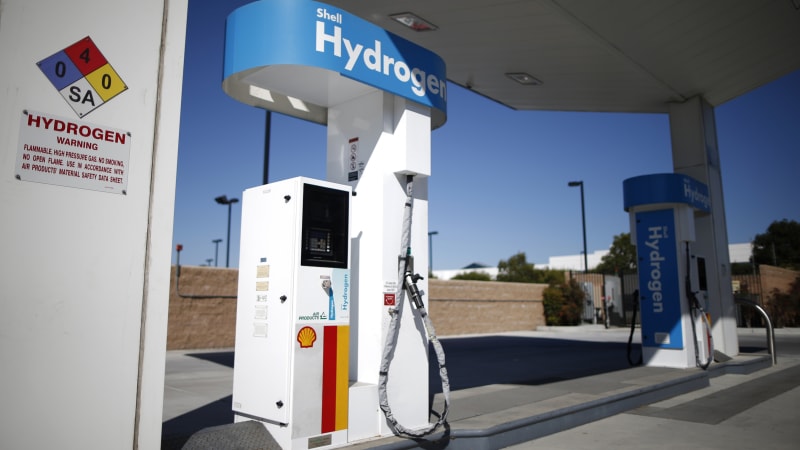 Hydrogen is an abundant but very reactive element which is not found chemically free in nature and is most often bound to oxygen or carbon atoms.

“To obtain hydrogen from natural compounds, energy expenditure is needed,” wrote Ram Gupta, a professor of chemical engineering at Virginia Commonwealth University and editor of a major study published in 2009.

“Therefore, hydrogen must be considered as an energy carrier — a means to store and transmit energy derived from an energy source” (“Hydrogen fuel: production, transport and storage,” Gupta, 2009″).

Hydrogen molecules are small, light, highly reactive with other elements, very flammable and burn with a hotter flame than natural gas (methane).

Safe handling requires extreme care since hydrogen will leak easily and can be readily ignited to create an explosion — though it is also less dense than air so diffuses quickly, which helps mitigate explosion risks.

Hydrogen’s reactivity poses more of a challenge since it will penetrate steel causing hydrogen-induced cracking and hydrogen embrittlement, both of which can cause pipeline failure unless expensive speciality steels are employed.

The biggest challenges, however, are related to hydrogen’s very low energy density compared with conventional fuels such as natural gas or gasoline.

By mass, hydrogen has the highest energy content of any fuel. On a weight basis, a kilogram of hydrogen contains almost three times more energy than a kilogram of gasoline.

But on a volume basis, hydrogen contains far less energy than other fuels. If hydrogen is stored as a gas, it would need a tank about 3000 times the volume of a tank of gasoline to contain the same amount of energy.

Employing pure hydrogen is therefore only practical if it is compressed or even liquefied to increase its energy density.

Compression or liquefaction is much more expensive than for natural gas and involves the expenditure of significantly more energy.

Low energy density is therefore the major obstacle to utilizing hydrogen in transport systems and even some stationary applications.

Just 11,000 hydrogen-powered cars are on the road, according to IEA figures, together with 20,000 fork-lift trucks in warehouse use, where refueling is simpler.

The dual pathways for producing hydrogen — electrolysis and gasification/steam methane reforming — are the main reason hydrogen appeals to such a diverse range of interest groups and governments.

The IEA has suggested several practical ways in which hydrogen use could be scaled up with government support, including blending hydrogen in low concentrations into existing natural gas pipelines.

But unless hydrogen production from steam methane reforming and coal gasification is paired with carbon capture and storage technologies it would increase rather than reduce greenhouse emissions.

Hydrogen fuel systems are therefore a gamble on the future viability of carbon capture, utilization and storage technology on a large scale.

For the moment, carbon capture and storage is likely to remain unviable without a significant price on CO2 emissions, given the enormous energy costs in the process.

The biggest obstacle to the future hydrogen economy is therefore not the engineering of storage and distribution of the gas itself but the politics of emissions pricing.

If the political emissions pricing problem can be solved, hydrogen is one possible route to a cleaner energy system – though it will have to compete with other technologies that may be cheaper and more convenient.

If the emissions pricing problem remains unresolved, hydrogen will likely remain too expensive for widespread use.

When electric scooters crash, who pays the bills?
Is hydrogen finally the future of clean energy?