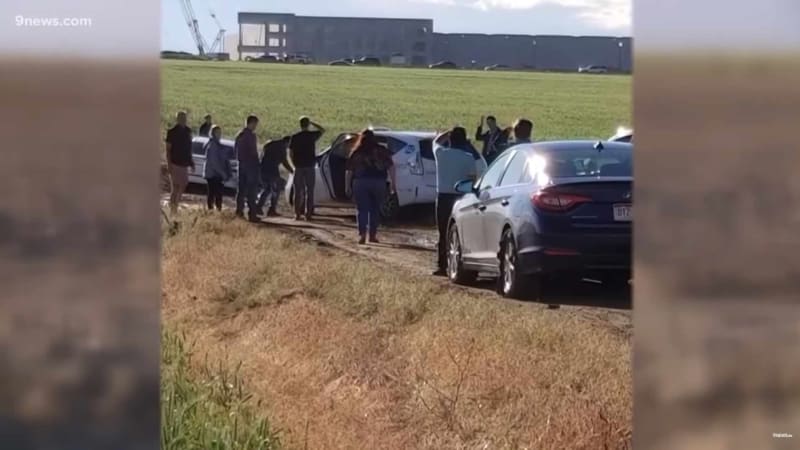 A particular milestone follows every revolution in technology, when an outage or a failure forces people to confront the muck they’re in when that technology fails. Another one recently happened in Denver, Colorado, the snafu composed of one part Google Maps, one part mud, and one part impatient, heedless drivers. When a crash on Peña Boulevard near Denver international Airport caused a traffic delay, drivers asked Google Maps for a detour to the airport. They were

, a paved road that turns to dirt before reaching Jackson Gap Road. Recent rains had turned that dirt to mud, and drivers who didn’t pay the proper heed got stuck.

Connie Monsees was almost one of those drivers, on the way to DIA to pick up her husband. She followed the conga line of about 100 vehicles taking the detour because, well, there was a conga line of vehicles. “There were a bunch of other cars going down [the dirt road] too,”

We’re talking about a farmer’s two-track between fields, wide enough for one car, so there wasn’t room to turn around. Monsees said she saw drivers trying to bypass the giant snag turn into the roadside ditch, which sent their cars flying.

Monsees fared better than the others. She avoided getting stuck thanks to her

, and gave rides to two other people and their luggage, reaching DIA in time for their flights. The trip did end up taking more than two hours, though, when the original plan had been to save 23 minutes. Monsees even got a souvenir for her time, explaining, “I tore up the inside passenger wheel well for my tire, but it’s not that big of a deal compared to some other people who really tore their cars up and got themselves stuck out there.”

Google Maps said the road hadn’t been marked as private, but the cities of

the road is “privately owned and maintained.”

In a statement to NPR

, Google Maps wrote, “While we always work to provide the best directions, issues can arise due to unforeseen circumstances such as weather. We encourage all drivers to follow local laws, stay attentive, and use their best judgment while driving.”

We hope people will take that best judgment and apply it to understanding what their cars can and can’t do, instead of thinking, “This is why we need a

.” Monsees, who already has a crossover,

. “I don’t know that it’s so much about Google,” she said. “It’s about us — that we want so badly for life to be efficient that we try to take shortcuts that aren’t really necessary.”