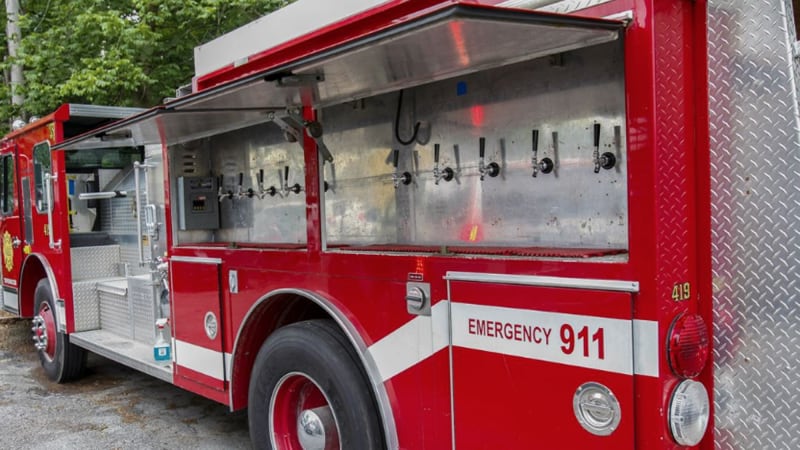 Years ago, when 38-year-old Kevin Mullan saw an antique

with a built-in wood-fire pizza oven, he could see the business potential. He turned that potential into a full-fledged reality, and he is now the proud owner of a 1987 E-One pumper fire engine with a custom walk-in cooler and a string of beer taps that’s been featured in Toledo’s paper

‘s name is a nod to the area code of Mullan’s home, Toledo, Ohio, where there weren’t any beer trucks for rent (go figure!). And there still aren’t any yet, but starting in July for a reasonable fee of $450, anybody in the city can bring home Mullan’s mobile bar for four hours.

On the outside, the truck, which came from Michigan’s Leonidas Township, looks pretty much the same as it did originally with its red coat of paint, decals that say “EMERGENCY 911” along the sides and some of the old exterior levers and hookups used to fight fires are still installed, too. A Tapped419.com decal suggests there’s something unique about the truck, though, and side panels open to reveal 10 beer taps built into the truck. Inside, the

has a giant walk-in cooler that was made possible by removing the 1,500-gallon water tank. Ladder 419 has room for onboard C02, a generator, and 15 kegs, which can be beer, wine, soda pop, or coffee.

The beer truck will make its official public debut on June 28, 2019, at the Bring Back the ’80s and ’90s event in Blissfield, Michigan. It will serve beers from Tecumseh Brewing Co. and Black Fire Winery. For more information visit

or watch the video below.