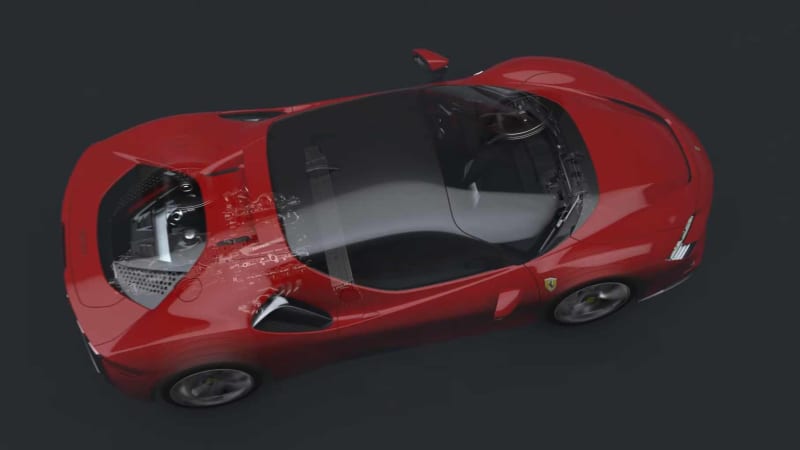 SF90 is the newest foal in the Maranello stable, and Ferrari continues to parade it for the crowds. A new video shows how the plug-in

four powertrain modes work, controlled by buttons on the lower left side of the steering wheel. The greenest mode gets a button marked “eD,” for electric driving (now that Smart’s effectively dead here, someone had to pick up the eD moniker). In that guise, the 7.9-kWh battery mounted transversely behind the seats sends energy to the two e-motors up front, and can power the SF90 for up to 15 miles as a front-wheel-drive coupe.

Next up, the “H” button turns the SF90 into a hybrid, with a priority on maximum efficiency. The battery sends its power to the dual e-motors in front and the third e-motor between the engine and transmission, with the 4.0-liter twin-turbo V8 firing to work the rear wheels as well. Under low loads, the control logic can switch from Hybrid mode to pure electric driving, then reengage the ICE on demand.

Above that, a checkered flag icon represents Performance mode. Here, the ICE is always running, with the priority on keeping the battery charged.

The gutsiest mode gets a clock icon, representing Qualify. This extracts all the performance available, the video indicating this is where the 1,000 CV, or 986 horsepower, comes into play. It isn’t clear if Qualify is the only mode that unlocks peak horsepower, of if Performance can do so as well. In fact, we’re still not sure what the SF90’s effective horsepower is; Ferrari added the V8’s 769 hp to the three e-motors’ 217 hp to reach that total output figure, which isn’t how this is usually done.

We’ll undoubtedly get more answers once the first drives hit the interwebs. We already have a lot of questions about that intense steering wheel and its “View Max” touch controller, and the rather comely 16-inch display.