By doylestownauto on March 25, 2020 in Audi repair shop 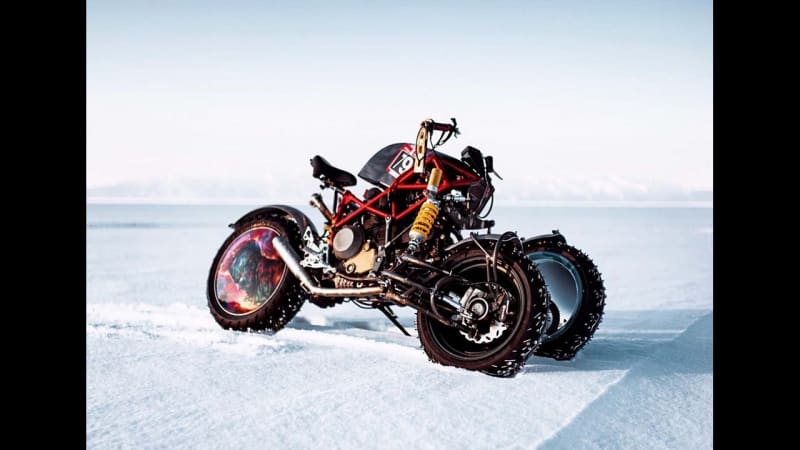 The motorcycle world, with its huge aftermarket, is no stranger to custom builds, but we’ve rarely see one-offs as wild as this. Russian builder Balamutti added a third wheel to a Ducati Hypermotard to create an ice-racing trike.

Although eagle-eyed motorcycle spotters will immediately identify the Hypermotard’s frame and engine, the percentage of stock, Ducati-sourced parts left on this build is low. Doubling the front wheels required designing and fabricating new swing arms and a custom steering mechanism. That’s a lot of work, but the advantages are undeniable: twice the number of wheels means twice the traction from the studded tires and twice the braking capacity. The setup should make the Hypermotard considerably easier to handle on an ice track, too.

The 1.1-liter engine wasn’t left untouched. Grok this: the folks at Balamutti took a Garrett GT35 turbocharger and rigged a pulley system to the engine’s crankshaft to turn it into a supercharger. Technical specifications haven’t been released yet, we suspect this is the kind of build where “quick enough” does it, but keep in mind a stock Hypermotard puts at least 90 horsepower under its rider. Brembo brakes keep the power in check.

Vitaliy Selyukov, the man behind the build, told Asphalt & Rubber he named his creation Yondu after a character in the Guardians of the Galaxy. He explained he built it to compete in the Baikal Mile, a race held on frozen Lake Baikal near the border between Russia and Mongolia, but he announced the project on his official website 18 days after the event was scheduled to end. Whether it raced is unclear; what’s certain is that it’s one of the most insane builds we’ve seen since Lazareth showed a four-wheeled motorcycle that leans into a turn.