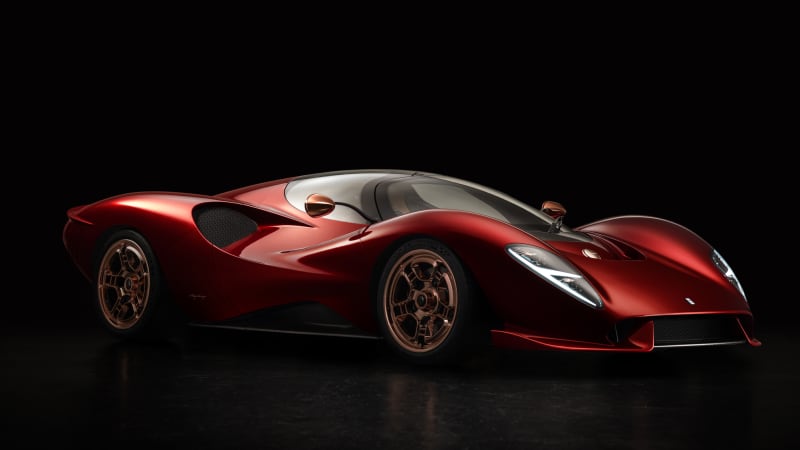 A De Tomaso re-launch has two presumed starting points: Either a Pantera, the original automaker’s most popular model, or a crossover, because of the days we live in. When De Tomaso brand owners Consolidated Ideal TeamVentures (CIT) began promoting their effort earlier this year, they did so with what looked like a camouflaged Pantera. Yet execs said they spent years studying Alejandro de Tomaso’s history, vision, and products and spoke of making a much deeper impact than merely recycling a classic. They have proved their point at the Goodwood Festival of Speed with De Tomaso’s first new product, the P72. It’s the modern incarnation of a car CIT didn’t know existed before they bought the brand, the De Tomaso P70.

It’s likely hardly anyone beyond De Tomaso historians remembers the P70 (Car Design News has an excellent two-part story on it). In 1964, Carroll Shelby wanted to develop a race car to take on the big boys for the Can-Am series launching in 1966. Peter Brock had designed a car, Shelby had financing, the Texan only looking for a chassis and someone who could turn his Cobra’s 4.7-liter V8 into a lightweight, bored-and-stroked 7.0-liter. He called De Tomaso, who was working on his first road car and a 7.0-liter V8. The two men agreed to collaborate, but things didn’t go well. As the project fell behind and Shelby grew wary about De Tomaso’s interpretation of the design, and about timely delivery of the promised engine and five cars, he sent Brock to Italy to oversee the project. This offended De Tomaso, and the partnership dissolved soon after. Shelby’s withdrawal — he began working on the GT40 project — angered De Tomaso enough to finish the P70 with help from Ghia. The Argentine showed the car at the 1965 Turin Motor Show as the Ghia-De Tomaso Sport 5000, and reworked the chassis to serve his Mangusta road car.

Whereas the Apollo IE pays homages to the GT1 era from the mid-1990s, the “modern-day time machine” P72 celebrates the sixtieth anniversary of De Tomaso and the prototype racing era in the sixties. In the original vehicle, the P stood for Prototipi, the 70 stood for the expected 7.0-liter engine. The P represents the same today, but 72 stands for the number to be built. A small number, but multiples larger than the ten Apollo IEs headed for climate-controlled garages.

We mention Apollo because the same all-carbon chassis from the Apollo IE underpins the P72. Jowyn Wong, the man behind the Apollo’s design, penned the P72’s Le Man’s body and that captivating, wide open rear end. The interior looks like a moody dalliance between Spyker and Pagani, full of polished copper, diamond motifs on the stitched leather, on the shift knob above the exposed linkage, and the pedals, plus golden lighting. A row of analogue dials bespeaks the past and the future, the circular theme capped outside by the small round side mirrors.

The carmaker’s finalizing the specs, and hasn’t said what will power the final version. The Apollo IE uses a naturally-aspirated Ferrari-sourced V12, but based on De Tomaso’s history with V8s, don’t be surprised by a free-breathing and burly eight-cylinder. Pricing is expected to be around 750,000 euros ($842,000 U.S.). That’s a reasonable sum given the prices of low-volume custom vehicles today, exemplifying the last of De Tomaso’s six core tenets: Heritage, Passion, Racing, European Design, and World-Class Performance at Extreme Value. The company is taking deposits now, and with Miller Motorcars on board as a U.S. dealer, don’t be surprised to see the P72 here — at least, in photos — one day.

De Tomaso P72 rebirth livens up the Goodwood Festival of Speed
Car payment trouble? How to turn it around