By doylestownauto on March 27, 2020 in Audi repair shop 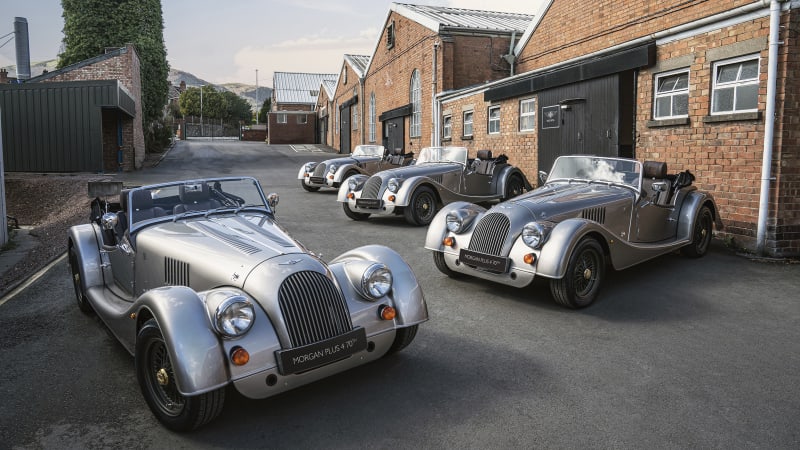 Morgan already unveiled the new-generation aluminum-chassied Plus Four (that’s Four, not 4), but the historic British company is not quite done building the previous generation yet. Marking the end of production of the Plus 4 (not Four) and its steel chassis, Morgan announced plans to release 20 Plus 4 70th Anniversary Editions. The first of the sold-out bunch have officially been built and are seen here.

Before Morgan’s factory in Malvern Link, United Kingdom, shut down for one month due to the coronavirus spread, it was able to build four Plus 4 70th Anniversary Editions. The color scheme on all four vehicles is no coincidence of taste, as every single 70th car will wear Platinum Metallic (platinum is known to celebrate 70 years). Other than the paint, though, each vehicle will be individually numbered on a plaque and unique for each customer.

The steel frame chassis on the Morgan 4 is an evolution of a steel chassis design first seen in 1936 on the Morgan 4-4. The Plus 4 itself was first built in 1950. Now, in 2020, the steel frame on the Plus 4 will be painted gold for the first time, as if these owners each plucked their own golden tickets. Part of the golden frame can be seen peeking through the floor carpeting.

The special goodies unique to the 70th cars continue with satin dark gray wire wheels, a motorsport-inspired front fascia, and an exterior black pack that darkens the stone guard, the A-pillars, and the side screens. The interior has leather seating, a Ravenwood veneer dashboard, dark gray box weave carpets, and a satin black Mota-Lita steering wheel.

Morgan revved up the performance on the last of the last Plus 4s, as well. Thanks to new engine mapping from in-house motorsport specialists Aero Racing, the Ford-sourced 2.0-liter four-cylinder makes 180 horsepower, up from 154 horsepower. That pairs with a five-speed manual transmission courtesy of Mazda. A tuned exhaust note comes from an Aero Racing sports exhaust that has ceramic black tailpipes. Morgan says the 70th cars are capable of zipping to 62 mph from a standstill in less than seven seconds.

Morgan hopes to restart production by the end of April.