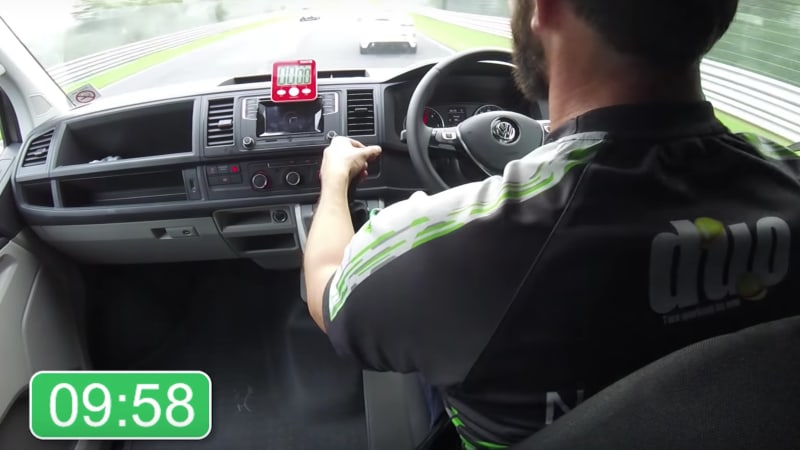 It’s not unusual to see a van on the Nürburgring Nordschleife track. In fact, if you’re spending time at the Brünnchen corner, sipping coffee or having a portion of currywurst and fries, it’s likely that you will see at least one white van lapping the track among the

, the track rentals and hatchbacks. But for now, an under-10-minute Nürburgring lap has been unattainable for van drivers — the best that anybody could manage was 10 minutes and 8 seconds, as

Transporter turbodiesel rental around the track in 9 minutes, 58 seconds. It wasn’t easy, as the accompanying video shows us. In fact, it took two days of testing to finally succeed, especially since the track wasn’t empty during Austin’s record attempts. And while the Transporter didn’t have performance modifications done to it, Austin and his associates did strip some extra weight off the

, including the passenger seat.

As a point of note, while the van seen here is a rental, it was loaned to Austin by his BTCC sponsor, Northgate Vehicle Hire. Usually taking a regular rental car onto the Ring is a terribly bad idea, as rental companies do not view Ring laps favorably. It’s almost certain that the rental will be spotted on the track by photographers selling souvenir pics, the photos will end up online, and the rental company might contact the offender with an unfriendly letter. Crash a rental at the Ring and you’re in even bigger trouble.

Luckily, a number of companies around the track have specialized in renting track-prepared cars just for this occasion, so if you arrive to the Nürburgring without a vehicle to lap, it’s easy to find a car you can take for a spin — often with an instructor.