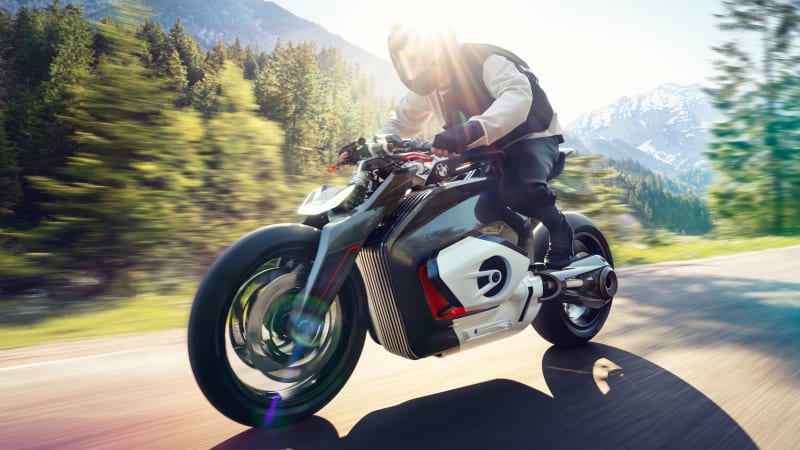 bike-making division, BMW Motorrad, has embraced the boxer engine for the best part of a century. With

manufacturing, BMW has a tough nut to crack: How to bring in core boxer engine characteristics when you’re not using an internal combustion engine at all? The new concept bike, the Vision DC Roadster, explores those design and engineering possibilities.

“The boxer engine is the heart of BMW Motorrad — an absolute stalwart of its character. But BMW Motorrad stands for visionary zero-emissions vehicle concepts, too. In view of this, one question that arises is: What would happen if we were to replace the boxer engine with an electric motor and the required battery? The Vision Bike shows how we’re able to retain the identity and iconic appearance of BMW Motorrad in distinctive form while at the same time presenting an exciting new type of riding pleasure,” says BMW Motorrad design chief Edgar Heinrich.

As BMW puts it, the engine in a conventional motorcycle is something to consider from the get go. The size of the engine affects the weight distribution and center of gravity. In an electric bike, the electric motor is relatively small, and the battery pack is the large object in the center of the bike. By implementing the battery pack the way one would position a boxer engine, BMW has gone after the boxer bike architecture: The battery is vertically fitted, longitudinally oriented, with the cooling elements protruding like the ribs of an air-cooled boxer engine, with the electric motor underneath it. There are knowing nods to the 1923 BMW R 32 bike design to drive home the point, despite the concept bike’s futuristic looks.

The grooved frame of the bike is milled from aluminum to save weight, and there’s also plenty of carbon fiber for the same reason. The LED lighting is kept simple for a minimalist look, as the bike’s ethos is centered on simplicity. The tires are bespoke items produced by Metzeler, and they feature fluorescent elements. No power figure or range is disclosed.

A production version of the bike isn’t all that unlikely, especially as BMW Motorrad says the Vision DC Roadster concept is a “symbol of the future” of the company incorporating alternative drive forms, or electric technology in other words. But it can take awhile before a production counterpart will hit the streets.

California brush fire torches $2.1 million worth of cars on a CarMax lot
Lightyear One is a solar-powered car with an eye-watering price