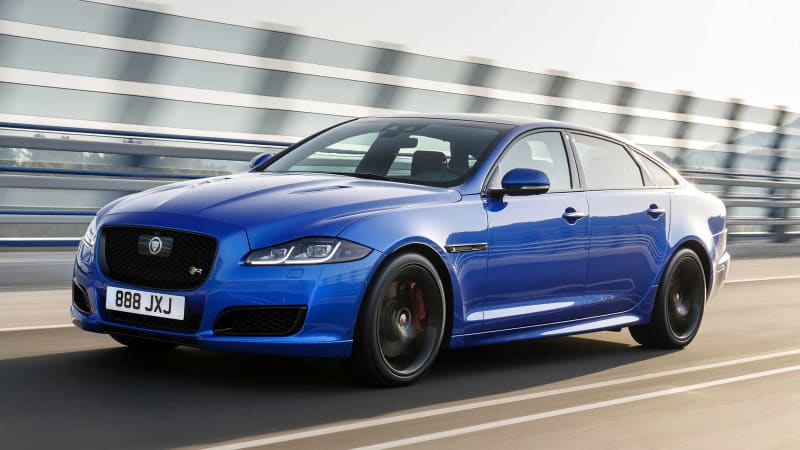 We’ve been posting on

the likelihood of electric Jaguars

for a while now, especially the

leading the charge as a new

flagship. Rumors at the beginning of 2018

predicted an XJ EV on our doorstep

by the end of 2018, the 50th anniversary year of the XJ. By April this year, it was looking like the

battery-powered XJ would use the I-Pace

platform and make an appearance sometime in 2019. Now,

Investor’s Day presentations, the automaker said it would debut a “large SUV and a large premium sedan” on its Modular Longitudinal Architecture (MLA) suitable for EVs,

and traditional ICE-powered cars. The sedan in question is the next-gen XJ.

Nick Rogers, JLR’s product engineering boss, said electric MLA vehicles will get 90.2-kWh batteries that return range of up to 400 kilometers (292 miles) on the European cycle. That would effectively be the

same size battery as the I-Pace

, which rides on its own one-off platform, and the same range; in the U.S., the

design chief Ian Callum and his team, has already been cleared. It swaps the four-door body for a five-door, a la the

, and introduces a new design language for the car and the carmaker.

Car and Driver says the new

statement sedan aims to be “a cutting-edge alternative to the

saying it will “remain Jaguar’s flagship in preference to a large SUV, such as the

J-Pace.” The point of introducing the EV first is to establish the

Eventually, an ICE version of the XJ powered by an Ingenium inline-six should come; that will welcome buyers not ready to make the all-EV switch, a necessary move in keeping with the XJ’s competition for global sales with the

and 7 Series. However, leaving room in the design for a conventional drivetrain will force compromises that the all-electric competition doesn’t face.

Production of the current XJ ends at the Castle Bromwich facility on July 5. The new sedan is slated to be “announced in the near future” and built at JLR’s plant in Solihull, which assembles Land Rover products. The same MLA platform

will support a road-focused Land Rover

as a sibling to the XJ, dubbed the “Road Rover” internally.

, penciled in for 2021. The Range Rover models will make the most use of the MLA platform, coming in ICE,

, mild hybrid, and all-electric versions employing at least four nameplates. The PHEV models get a 13.1-kWh battery good for 50 km (31) miles of EV range. Taking the opposite tack to Jaguar, Range Rover is expected to launch its EV model later in the cycle, because “Land Rover

to be a stand-alone model.”