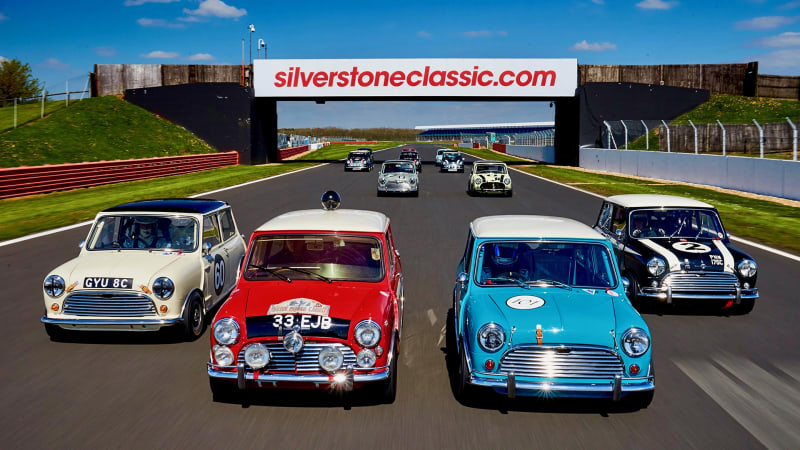 of the British Motor Corporation. Over the years, the Mini became popular among the British people and beyond, not just as a car but as a cultural icon. To celebrate its 60th anniversary, Mini is taking over Silverstone Circuit in England.

The racetrack announced that 60 classic Minis will be racing in the Silverstone Classic outing, July 26-28. Back in May, Silverstone sought pre-1966 Mini

models to participate, and the APB received an overwhelming response but fell just short of the 60-car goal.

But with the help of Motorsport UK, Britain’s

“It only seems right and proper that we mark the Mini’s 60th milestone with a 60-car grid, so we are really grateful to those at Motorsport UK and Masters Historic Racing, who are organizing these anniversary races, for securing this special permission,” said Nick Wigley, Silverstone Classic’s CEO. “As well as being a sixties fashion icon, the Mini’s reputation was built on some wonderful motorsport successes, so there could neither be a better, nor more appropriate, way to celebrate its 60th anniversary than with an incredible 60-strong grid at the world’s biggest classic motor racing festival.”

The Mini first received world recognition as champion of the 1964

Hopkirk will be present for 60-year Mini tribute and will be reunited with his original winning car, Cooper S #37 with license plate 33 EJB. Hopkirk will lead the Silverstone Classic’s Diamond Anniversary track parade with his Cooper S.

“I’m really flattered to have been asked to front this fantastic parade,” Hopkirk said. “It’s great that I’ll be back in my old car, and I’m going to be bringing the Monte trophy along, too. It was presented to me by Princess Grace.The Classic is such a brilliant event and, oh my goodness, it will be absolutely amazing to see 60 Minis altogether on the track at the same time.”

All of the Mini Cooper S models invited are powered by the same race-prepped 1.275-liter inline-four, so it’ll be an adorable and exciting race and a pure test of driver skill.