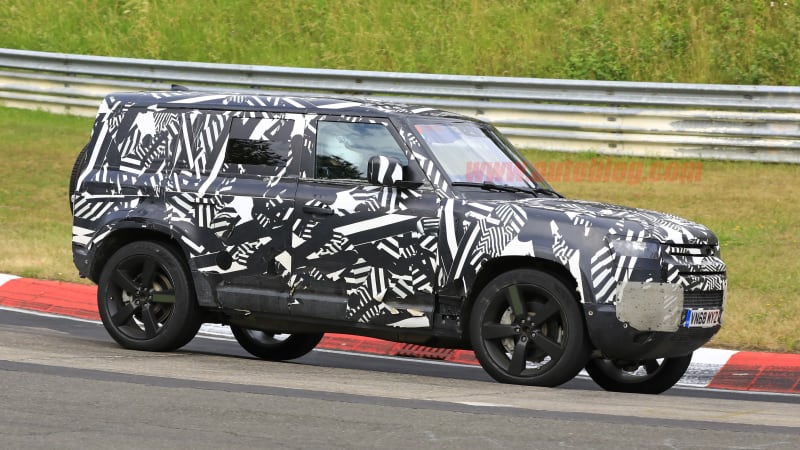 As the reveal of the all-new 2020 Land Rover Defender inches closer — it’s set for the Frankfurt auto show in September — we’ve now learned that what we’re actually anticipating is the debut of three new SUVs, not just one. Leaked information reported in Autocar India reveals that the iconic off-roader will be offered as three distinct models in three different sizes.

The three offerings will be the Land Rover Defender 90, Defender 110, and Defender 130, resurrecting previous model designations. In the past, those numbers corresponded to each vehicle’s wheelbase, but that won’t be the case for the 2020 Defender. The Defender 90 is a two-door, and is said to be closest in concept to the previous Defender. It will offer seating for five or six, although the exact configuration — three-seat front bench or side facing jump seat in the cargo area — is not known. The Defender 90 reportedly rides on a 101.9-inch wheelbase and is 170.2 inches long overall. For comparison, a two-door Jeep Wrangler is 166.8 inches long and has a 96.8-inch wheelbase. The Defender 90 is the tallest of the trio at 75.9 inches (approximately two inches taller than a Wrangler) and is 78.7 inches wide, same as all Defender models.

The new Defender 110 is a more mainstream variant, with four doors and seating for five, six, or seven passengers. It sits on a longer wheelbase of 119.0 inches and stretches 187.3 inches from stem to stern. Those dimensions closely shadow the four-door Wrangler, which has a 118.4-inch wheelbase and is 188.9 inches long. They’re also not far from the Mercedes-Benz G 550, which is 2.4 inches longer overall but rides on a 5.2-inch shorter wheelbase.

The Defender 130 is a larger four-door version, and it shares the 110’s wheelbase of 119.0 inches. It adds more than a foot of extra length — presumably to the rear overhang — for a total bumper-to-bumper dimension of 200.8 inches, putting it close the the Mercedes-Benz GLS in size. The Defender 130 will seat eight passengers. Both the 110 and the 130 stand 75.4 inches tall, or about half an inch shorter than the Defender 90.

Engine-wise, Land Rover is said to be preparing a trio of 2.0- and 3.0-liter turbo-diesels for international markets, but we’re likely to see the gasoline offerings. They are said to include an Ingenium 2.0-liter turbo good for 300 horsepower and 295 lb-ft of torque, a 2.0-liter plug-in hybrid with a combined output of 404 horses and engine output of 295 lb-ft, and a 3.0-liter turbo V6 rated at 400 horsepower and 406 lb-ft. Those are for the Defender 90 and 110— the 130 could use the same powertrains as the 110, or could be restricted to only the more potent offerings. Sadly, but not surprisingly, a manual transmission is not believed to be part of the plan.

Land Rover’s upscale ambitions for the model are revealed in some of the equipment that will be on offer, which include Windsor leather, 16-way power seats, and a 12-inch digital instrument cluster.

We don’t know whether Land Rover will unveil all three versions at the Frankfurt show, or whether it will space out the reveals. The Defender 110, however is expected to be the first to market, this fall, with the Defender 90 following in the spring of 2020, and the Defender 130 arriving a little over a year from now.

2020 Land Rover Defender will be three SUVs, not just one
The Ford GT Mk II is a $1.2 million track-only supercar