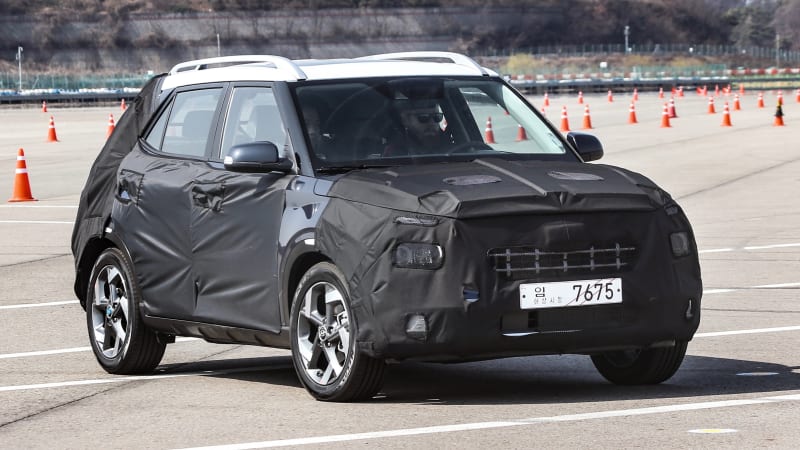 even smaller than the

, was only just revealed today. But a few weeks ago, we took a

in a pre-production prototype at Hyundai’s proving ground in Korea, and now we can finally tell you what it’s like to drive. From the driver’s seat, the Venue is easy to see out of, thanks to its squared-off greenhouse and reasonably thin pillars. Headroom is good both in front and in the rear, and rear-seat legroom is adequate for a six-footer. At 91.9 cubic feet, the stated passenger volume is roughly two cubes less than the

Behind the 60/40 split-folding rear seat, the Venue offers 18.7 cubic feet of cargo space, nearly equaling the Kona’s 19.2. A two-position rear load floor can be set level with the liftgate opening or a few inches lower. When not in use, the cargo cover cleverly can snug up against the rear seatbacks. Fold the rear seatbacks down, and the Venue’s cargo volume is 31.9 cubic feet, compared to 45.8 for the larger Kona.

The example we drove was equipped with the CVT. Push the accelerator more than halfway to the floor, and the transmission imitates a stepped-gear automatic with defined shift points, minimizing droning—although the 1.6-liter is still fairly raucous. In Hyundai’s internal testing, the Venue needs 11.2 seconds to accelerate from 0 to 62 mph, which ties their result for

. That’s not quick, but this class of vehicles is not known for its speed. Hustled through a slalom course, the Venue exhibited moderate body roll but steering efforts were reasonable. Our turn behind the wheel was just a quick preview, but we’re eager to drive a finished version on real roads.

That opportunity probably won’t come for a few more months, as the Venue isn’t scheduled to reach

until November. There’s no word yet on pricing, but given that the model slots in below the Kona in the lineup, look for a starting figure less the Kona’s $21,035 base sticker. Inexpensive and with a simple design that’s utilitarian rather than cloyingly cute, the Venue could hold appeal that belies its size.