Nice, France — Ford fans upset the new Focus ST won’t be coming to America can take some comfort in the fact their European brothers remain equally envious of the F-150 Raptors and Shelby GT350s the U.S. saves for itself. Forbidden fruit retains a powerful appeal though, a fact that Ford Performance’s European Engineering Manager Stefan Muenzinger understands himself. He’s lucky – after tasting the GT350 on a U.S. secondment he was able to buy one and ship it home to Germany. Sadly he can’t return the favor and send a boatload of Focus STs back the other way across the Atlantic.

This is a seriously capable performance hatch and a significant step up in ambition for the new Focus ST. If the previous one was jalapeno hot, this new version is more habanero. Sure, the 280-horsepower, 2.3-liter EcoBoost is detuned somewhat compared with its previous application in the Focus RS. But this new ST has ambitions to become a benchmark all-round hot-hatch king in the mould of the Golf GTI, the addition of diesel and station wagon variants only increasing its appeal.

Amid some significant restructuring, factory closures, and job losses in Ford’s European operation, the launch of the Focus ST is a temporary relief. Leo Roeks, Muenzinger’s boss and head of Ford Performance Europe, remains upbeat and says he is busy with new projects. But it’s clear Ford is keen to promote a good news story like this. 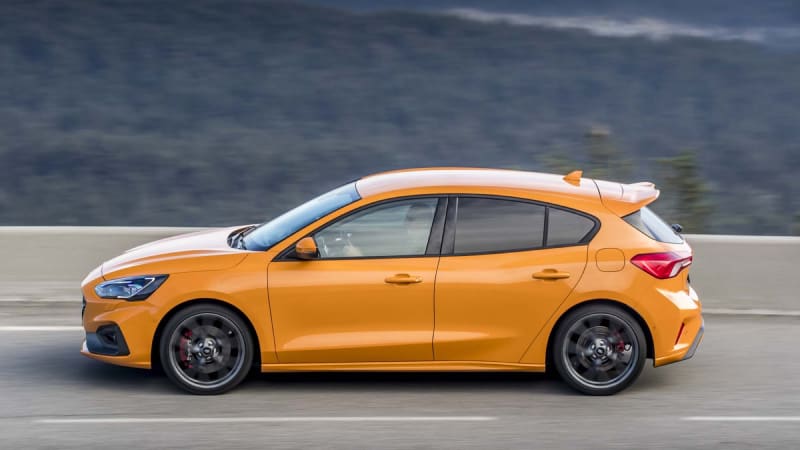 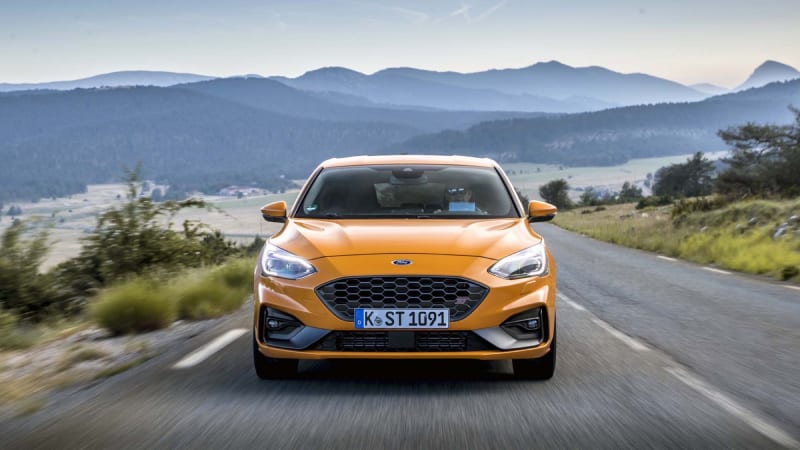 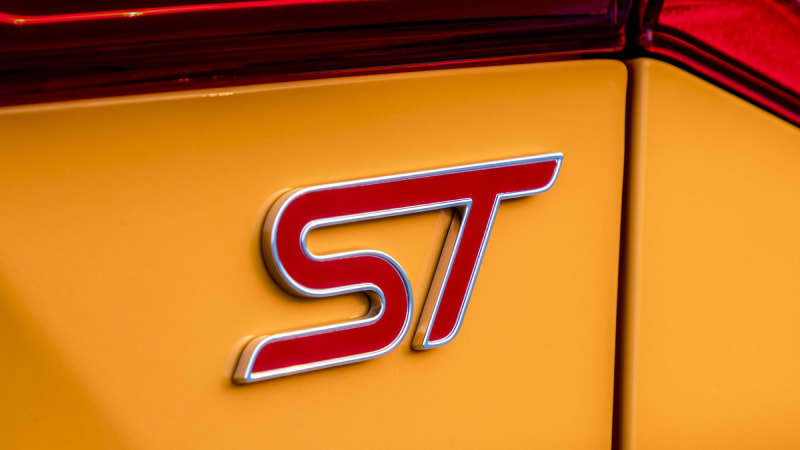 Chatting with Muenzinger his priority with the Focus ST was to carry over the spirit of its Fiesta brother, albeit with the greater sophistication of the Focus. Asked to pick one quality setting this ST apart from the Golf GTI, Hyundai i30 N (the Euro equivalent to the Veloster N), and Honda Civic Type R they benchmarked, he nominates the steering. The Focus ST has a Ferrari-fast rack ratio, taking just two turns to go lock to lock. He also points to the adaptive Continuously Controlled Damping and an active, torque-distributing front axle similar to the VAQ ‘differential’ Volkswagen fits to the Golf GTI. The traction benefits are clear, the Focus ST hitting 0-62 mph in 5.8 seconds and matching the all-wheel drive RS over a quarter-mile.

All this gives the new Focus ST a wider bandwidth of ability. And drivers can further customize things with various driving modes (familiar from other Ford Performance products) and an optional Performance Pack. The latter adds Track mode to the standard Slippery/Wet, Normal and Sport, bringing with it rev-matching, launch control and an even sharper calibration for the steering, ‘diff’, throttle and stability control. It all comes at a cost though; the European MSRP is now equivalent to premium rivals like the Golf.

The new Focus is a handsome, if somewhat understated, machine compared with its predecessors. It sports some ST embellishments, like the grille, 19-inch wheels and rear spoiler, that set it apart from the rest of the range. That said, the overall effect is relatively subtle given the intent, particularly in the optional Ford Performance Blue. But select the aptly named Orange Fury, and the visual impact matches the promise of its spreadsheet. The cabin gets Recaro seats, Sync 3 infotainment with nav, and plenty of standard equipment – but still can’t match the soon-to-retire Golf for premium feel or tech integration. 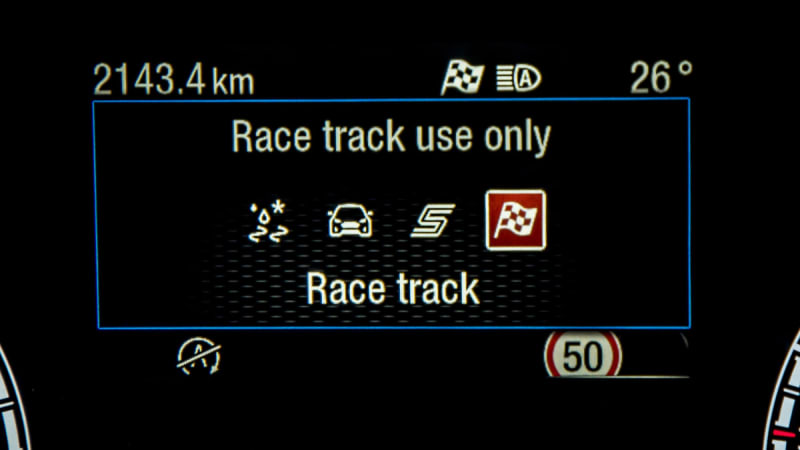 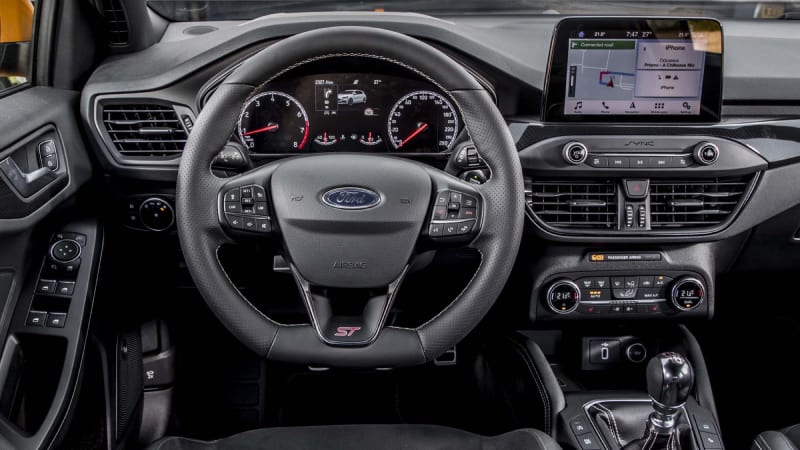 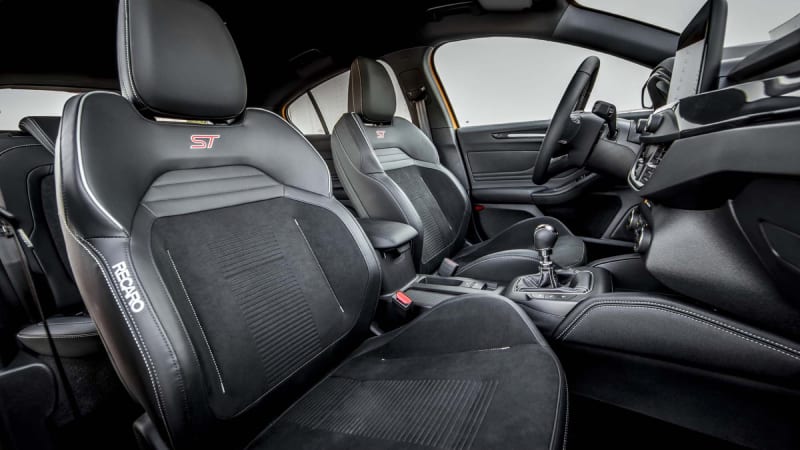 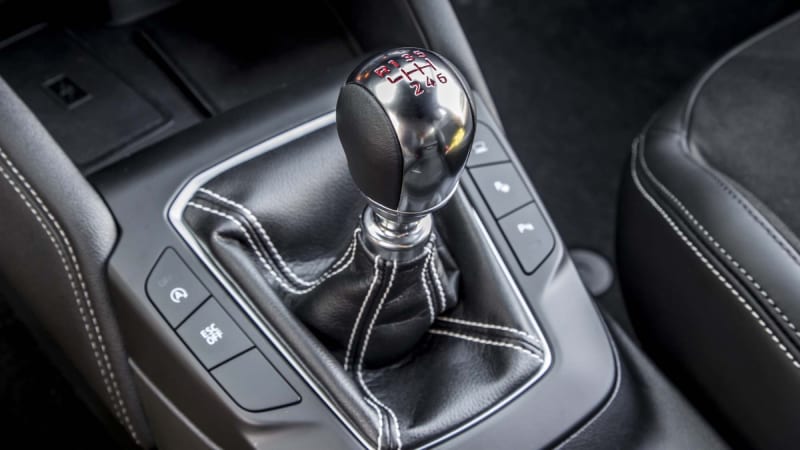 Thankfully for Ford the Focus proves itself more than a one-trick pony, the extra scope of the chassis tech and the modes controlling it meaning it can play to a much wider audience. Normal mode is just that, only a degree of low-speed brittleness hinting at the car’s true intent. As speeds rise the ST noticeably tenses as it switches to Sport mode with some additional piped-in engine sound, decisively stiffer damping and reduced slack in steering, throttle and response from the front axle. With climate, cambers, and corners roughly equivalent to a Californian canyon road, the test route in southern France provides the kind of challenge a European Ford Performance product shines on.

Previous experience of the Fiesta ST on these same roads is an interesting comparison, especially given the stated ambition to match the smaller car’s sense of agility and fun. Like the Fiesta, the Focus is all about front-end bite, through both the fast steering and the balance of the chassis. This response – and the lack of understeer – give you immediate confidence to push. The Fiesta’s less sophisticated suspension setup means it feels more playful in response to throttle lifts and trailed brakes. In contrast, the Focus is more mature and tied-down, but shrugs off ever more ambitious corner entry speeds with steadfast grip on turn-in and superb traction as you power out of the turn. 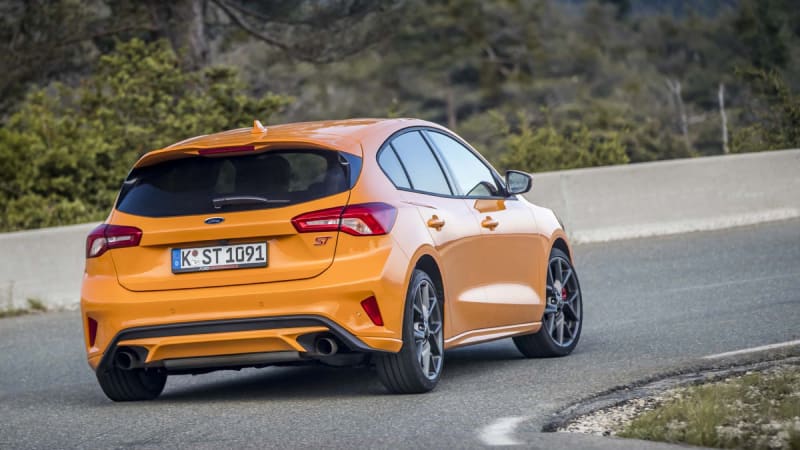 In Sport, and to a greater degree in Track, the eLSD plays a bigger part, though it demands a firmer hand at the wheel to counteract a desire to sniff out cambers and writhe in your hands as the power goes down. Hold your nerve – and right foot – and the ST hauls itself out of the turns so enthusiastically you rarely wish for the RS’s all-wheel drive. This sensation will be familiar to European hot hatch drivers, but the new ST’s proactive approach puts it at the head a very competitive class. European customers have always rated the Focus highly for its ride quality and the new ST takes this to new levels, the sophisticated dampers swallowing all these demanding roads throw at them while keeping the driver in touch with what the chassis is up to. Most impressive is the ability to switch from relaxed cruise to maximum attack at the touch of a button, Ford making good use of the CCD dampers’ range of ability.

While the engine feels unremarkable beyond its torquey punch and mid-range grunt, it does gain some neat tricks, such as an anti-lag system inspired by the GT and rev-matching on up- and downshifts. Flat upshifts and ultra-smooth downshifts make the already sweet stickshift even more satisfying, though hardcore manual enthusiasts will be annoyed that you can’t turn it off in Sport or Track modes. A seven-speed auto will arrive later in the year.

Overall, Ford is less obsessed about chasing numbers than some of its rivals, concentrating instead on sensation. In this respect the ST is a masterclass and far closer to the RS, albeit with the all-round usability and friendliness of its predecessor. In this respect it’s like the best of both and a serious step up. More’s the pity we won’t be seeing it this side of the Atlantic.