MONTICELLO, New York –– The M5 Competition needs a better name. The “Hammer” has been done. C’mon, Dodge has its colorful Hellcats and Demons. Yes, BMW is a sober German luxury brand, but appending “Competition” to the name and decklid of the standard M5 is too subtle for a midsize sedan that can nip a 647-hp Ford GT supercar to 60 mph (BMW says it’ll do the deed in 3.1 seconds, but Car and Driver timed a regular M5 at 2.8 seconds, so it’s almost assured that it’ll beat the GT’s 3 second time. – Ed.), and its claimed 10.9-second quarter-mile is just 0.1 seconds behind the Ford, or the 797-hp Dodge Challenger Hellcat Redeye.

That’s madness, or in German, Der Wahnsinn. (Hey, maybe that’s the name!) The M5 Competition’s 617 horsepower (17 more than the M5) and 553 pound-feet of torque is equally Wahnsinn, as I discover during laps at my local stomping grounds, the Monticello Motor Club in New York’s Catskills.

To the untrained eye, this M5 might be any other 5 Series, that longtime upholder of the luxury sedan status quo. Trained eyes will spot that Competition badging – optional on front fenders, in case you’d prefer to stay stealthy – with higher-volume air intakes and gloss black applied to the kidney grille, mirror caps, fender gills, rear Gurney lip and apron diffuser. There are also 20-inch lightweight forged alloys and four black-tipped exhaust outlets. After multiple stairsteps in power and price from your basic 530i – from $54,395 and a 248-hp turbo four, to $110,995 and a 4.4-liter, twin-turbo V8 – the M5 Competition helps advance the (somewhat pointless) arms race in sport sedans, provoking both the 603-hp Mercedes-AMG E 63 S, and the 605-hp Audi RS7 Performance.

The last time I drove the standard M5, I was staging an Escape from New York when a wheel was mangled by an evil pothole on Manhattan’s West Side Highway. Day trip, spoiled. This time, I was determined to make it to Monticello in one piece, because this baby is even stiffer: Springs and hydraulic dampers are 10 percent firmer than the regular M5’s, the rear anti-roll bar is stiffened, and it’s 0.28 inches lower. For better wheel guidance at the rear, the toe link’s rubber mounts are exchanged for ball joints. BMW says the tauter core can be felt even in the car’s Comfort mode, and the morning’s jouncy run on the ancient, hand-cut Belgian blocks of my Brooklyn street seems to confirm it.

The M5 makes its entrance through Monticello’s artistically wrought metal gates, flashing an equally classy paint called Donington Grey Metallic. I sign the clipboard sheet proffered by the guard, peering through the BMW’s generous windshield at the rain-dampened 4.1-mile circuit. I’ve enjoyed the adjustable embrace of the BMW’s sport seats, clad in handsome saddle-colored “Aragon” Merino hides. Here, evidence of the M division’s handiwork is subtle, including red-and-blue striped M seatbelts. Round digital gauges flash concentric rings of animation as you approach the 7,000 RPM redline. This more driver-centric M5 sports digital gauges that are an homage to classic, analog BMW dials, which I prefer to the wraparound displays of the “Live Cockpit Professional” that makes its 5 Series debut on the 2020 M5 35 Years Edition.

I ease into the paddock and clubhouse garage, where track-suited club members are futzing with roll-caged, race-prepped exotics. One or two seem to cast side-eye at the BMW and its pilot, perhaps wondering why anyone would take this 4,370-pound, all-wheel-drive barge onto the track. Some will soon pay for their insolence, when the BMW applies its unfair horsepower advantage to leave peashooter Porsches in its 617-hp wake. Like the M5, the Competition’s other secret weapon is an M-tuned AWD system and active rear differential, which together banish old-school wheelspin, seemingly no matter how hard you try to break things loose.

The track is still drying when I’m first waved out of the pits, with scary-looking lagoons lurking in places. For all its fierceness and technology, the BMW feels a bit squishy and vague at first, especially in the wet. But AWD is the new secret sauce of any new M5. For max performance in any situation, just set-and-forget the 4WD Sport mode, which sends more torque rearward and applies a freer algorithm to stability systems. After years of testing M cars, I’ve made peace with their somewhat fussy controls that here include individual settings for the steering, suspension, exhaust and eight-speed, dual-clutch transmission. Twiddling has become easier since BMW added two ruby-colored steering wheel switches – labeled M1 and M2 – to store a pair of your preferred combinations of settings.

For the suspension, I select the Sport mode that BMW perfected for Nürburgring’s pockmarked Nordschleife circuit. The company recommends Sport Plus for creamier, Grand Prix-style surfaces. Compared to the M5, the Competition also gets a firmer link to the aluminum-and-carbon structure through engine mounts with increased spring rates, which BMW says creates faster engine response and sharper corner turn-in. Um, if you say so.

Increased camber for the front axle does help this big barge absorb lateral forces through its Pirelli P Zero PZ4 tires. That’s a good thing in tight sections like the esses that zig uphill just after MMC’s longest straight. As for that mildly kinked, mile-long gauntlet  –  which I’ve long used as a no-excuses benchmark for accelerative might – the M5’s bombastic power rockets it to around 159 mph, only about 11 or 12 mph less than my apogee in supercars like the McLaren 675LT or Ferrari 488. So yeah, it’s fast. Peak torque is served anywhere between 1,800 and 5,800 rpm, a 200-rpm wider band than the M5. The BMW’s gold-caliper, carbon ceramic brakes, an $8,500 option, help keep fade at bay, even at these Autobahn speeds – though they do begin to smell (but not smoke) after seven or eight consecutive laps. 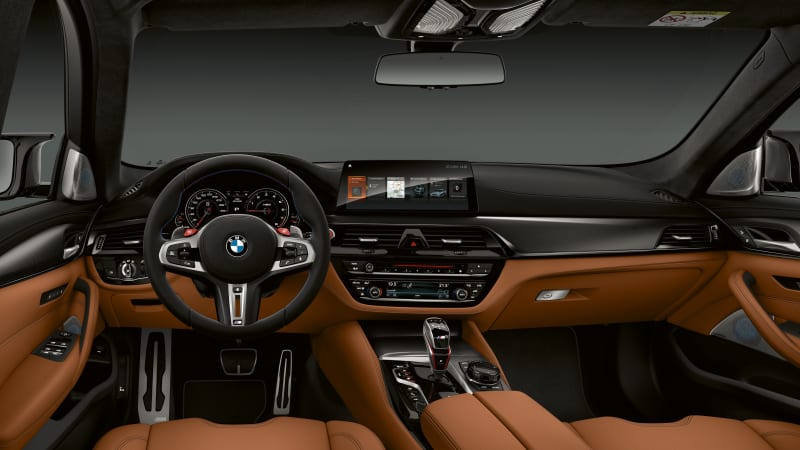 Chris Duplessis, the former pro rally champion and all-purpose nutjob who’s MMC’s track director, has coincidentally been driving an M5 as a safety car. I let Duplessis take one of his usual half-sideways excursions around the circuit, and he concurs: The Competition perhaps feels a skosh tauter than the basic M5, and turns with more alertness, but it would take a back-to-back drive to tease out tangible differences. Aside from this Competition’s stony ride on poor pavement, and the Sturm und Drang as it boomed over freeway expansion strips, my only everyday gripe was a climate system that was stingy about dialing up the fan speed, even when I set the A/C to extremely low temperatures.

Some drivers have groused that the standard M5 sounds too demure, and the Competition does amp up the soundtrack through its twin-pipe, flap-controlled exhaust. Hit the console’s exhaust switch, and the BMW speaks softly without dropping its big stick. Press it again, and this M5 sounds like a pissed-off bear that’s been woken from hibernation, including belching exhaust backfires. This M5 still doesn’t match the psychotic bellow of the Mercedes-AMG E 63, but it’s plenty aggressive for all but the most attention-seeking owner.

So is the BMW fun on track? Yes, in a mildly silly, tiger-shark-out-of-water fashion. But it’s twice as fun on the street, where the M5 Competition underscores its Autobahn-style ferocity and magisterial handling. Mopar fans may howl, but in most street situations, the M5 Competition will easily smoke even a Dodge Challenger Hellcat from a stoplight – minus the smoke. Where even skilled drivers can struggle to launch the rear-driven Hellcat without the tires lighting up like Cheech and Chong, the BMW sends every molecule of rubber and scrap of torque to the pavement.

Departing Monticello, I briefly switch into the car’s notorious, tire-abusing 2WD mode, the one that seems designed to stem the kvetching of BMW fans over the brand’s Good Old Days. For a minute or three, it is fun to drive the BMW like it’s a Dodge, only with exponentially more agility and control, exiting corners with smoke flaring from those poor Pirellis. The only dumb part is that you have to switch off stability control entirely to send all 617 horses to the back – with only modestly wide 285/35 R20 tires – which will at least make one appreciate the stability control’s safety net even more.

But catapulted along Cold Spring Road near the track, a ribbony dream that twists through tall stands of pine and spruce, the M5 Competition is just an embarrassment of riches: Drive it harder, then harder still. The BMW’s sick thrust and limitless confidence finally sucks the air from my lungs. Der Wahnsinn, indeed. Sedan madness, German-style.