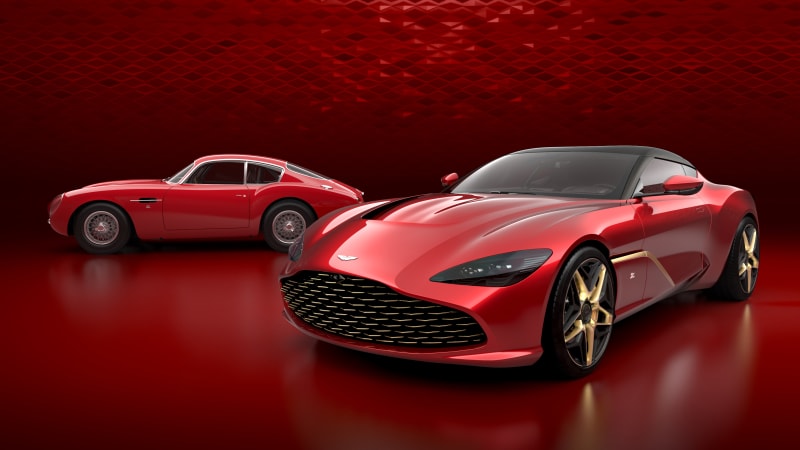 The 2020 Aston Martin DBS GT Zagato has finally been revealed in new renderings of the production vehicle from the British sports car builder. This is the car that’s only being sold in pairs with the continuation DB4 GT Zagato, and only 19 pairs of the two models will be built. It also looks a whole lot like its predecessor, the Vanquish Zagato. It has the rocket booster taillights, exaggerated rear fenders, double-bubble roof and enormous front grille, but there are differences, some of which are particularly unique.

Take the front grille, for example: Besides lacking the dual round fog lights of the Vanquish example, the DBS grille is active. According to Aston Martin, the grille is made up of 108 individual pieces of carbon fiber, and when the car is shut off, they all move to make the grille solid and flush with the body. Then when the car fires up, they all move to allow air through. The company describes it as the car appearing to “flutter” to life.

Then there’s the roof, which is one piece of carbon fiber that stretches from the windshield to the edge of the trunk lid. It’s a gorgeous piece that adds a two-tone look and highlights the double-bubble design. It also lacks any molded-in louvers to allow rear visibility. To get around that, Aston Martin has added a rear-view camera that displays images in a screen where the mirror would go, just like GM’s mirror screen.

Those are the most unique design tweaks, but there are more subtle ones, too. The whole car looks lower and longer than the Vanquish, in part thanks to the DBS’ leaner body. The side vents are longer. The rear taillights are smaller and incorporated into a black finish panel. There also aren’t deep side skirts. Instead, the rocker panels are rounded and tucked in like on a ’60s sports car.

Final specifications for the DBS GT Zagato are still unclear, but the company has said that the car will be based on the DBS Superleggera. That means it will have a twin-turbo 5.2-liter V12 making at least 715 horsepower and 664 pound-feet of torque. That’s significantly more than the Vanquish Zagato’s 576 horsepower. Production begins in 2020, and pricing for this and its DB4 continuation partner is $7.9 million.