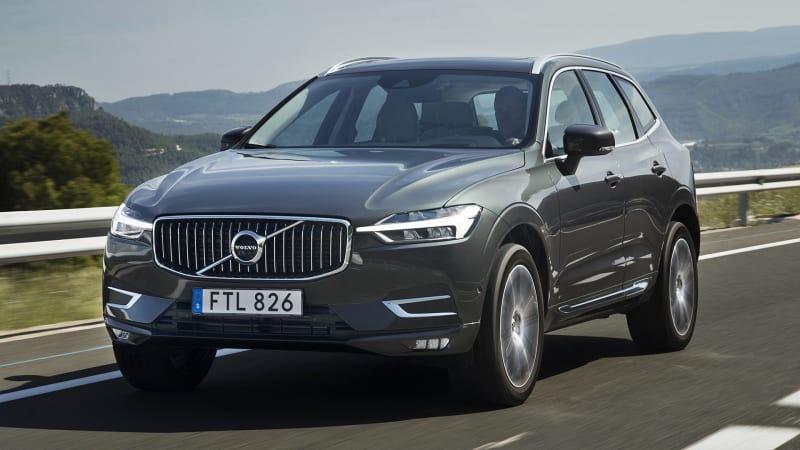 is one of the best-looking

in this class. Inside and out, it exudes a premium feel that’s also slightly quirky. From the tiny Swedish flags fluttering from the seats to the Thor’s Hammer headlights,

puts a lot of attention to detail in the design, and it’s rewarding for customers.

The 2.0-liter turbocharged and supercharged four-cylinder is enjoyable, though it seems like an overly complicated way to make 316 hp. It’s strong from stoplights and is quick during aggressive acceleration. The cabin, though attractive, is a bit of a mixed bag. I had no trouble installing a rear-facing car seat base in the middle of the second row, and there was a decent amount of room with the baby on board. Conversely, I’m liking the Sensus touchscreen infotainment system less as time wears on. A few years back, I was struck by its elegance. Now it just seems overdone and in need of some simplification for the controls.

Comfortable, good looking, a nice ride/driving experience, and all the latest tech. There’s not much to dislike here. Personally, I tend to lean car over crossover, so I’m not convinced that the

is the hands-down choice over the

wagon. I was able to haul two larger pieces of furniture in the XC60, but I looked up the cargo capacity of the V60, and they would have fit in there, too.

The XC60 does allow you to lower the suspension for easier cargo access, which is nice, but you don’t need even that function in the lower-riding V60. That said, this is a great choice if you want/need that higher riding position.

We tend to think of today’s glut of crossovers as a bad thing, emblematic of a nation that’s given up on the notion of driving enjoyment and instead resigning itself to practicality above all else. The Volvo XC60 challenges that notion. It’s undeniably handsome inside and out, with a tasteful exterior opening up to an interior that’s luxurious without being ostentatious. And Sensus, Volvo’s in-house infotainment system, still suits me better than most of its competitors. I especially like the windowed Android Auto and Apple CarPlay approach that still leaves access to the rest of the infotainment system when a smartphone is connected and in use.

The driving experience is enjoyable, too. There’s plenty of power on hand from the T6’s turbocharged and supercharged 2.0-liter four-cylinder engine. Like Greg, I question whether such a complicated drivetrain is really necessary to produce 316 ponies, but at least the result is an engine that makes good power across the rev range without significant peaks or valleys in delivery. The XC60 feels comfortable on twisty roads, with a suspension that’s on the firm side of compliant — exactly as it should be.

The Volvo XC60 is one of my favorite vehicles in the entry-level luxury crossover segment. I’d have to think long and hard about whether I should save some money and choose an

, but I would pick the Volvo over the

I’m the outlier here, because while I find the XC60 comfortable inside and attractive enough as an overall proposition, I felt the on-road experience was lacking. In the default Comfort drive mode, the XC60 is yachtlike, bobbing around on the road. It’s so over-plush that it seems out of character, not to mention the fact that there’s too much body motion for passengers. I took it out on a long weekend family trip a few hours north, and everyone was more comfortable (and I was more engaged) with the car in Individual mode, with the suspension and steering set to Dynamic and the drivetrain set to Comfort. Dynamic is really the ideal balance, a bit of European firmness without a hint of harshness. It could and should be the default suspension setting.

Power delivery is fine, if a bit coarse. And like Greg, I’m getting awfully sick of Sensus. And it’s less about the interface than it is the hardware — it’s just plain slow. Or it’ll freeze and lock you out of a lot of functions until you restart the car. It’s just not ready for primetime, and never was.

Volvo’s cars all share the same basic building blocks, but my overall sense is that the specific tuning and calibration in this model was compromised in an attempt to translate things to American tastes. I simply don’t like the choices they made in that regard. The V60 is most of the functionality with fewer drawbacks — if driving gives you an iota of enjoyment, take the wagon.