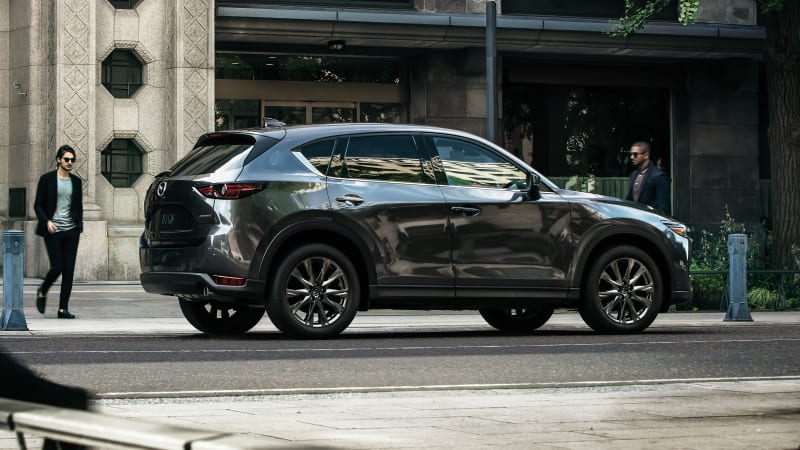 It seems like we’ve been waiting forever, but the wait is finally over.

Mazda has finally launched a diesel version of the CX-5

for the U.S. market, unveiled at the

. Specifically, the 2.2-liter Skyactiv-D turbo-diesel engine will be offered in the higher-end

Signature AWD, part of what

calls its “path to premium,” as the company continues to set its sights on some of the more expensive competition.

that employs a smaller turbocharger first at low rpm for quick throttle response, after which a valve opens to spool up a larger turbocharger at higher rpm. Mazda says this provides “smooth and linear response from low to high engine speeds, and greatly increases low- and high-end torque.” Mazda estimates the output of the engine to be 168 horsepower at 4,000 rpm and 290 pound-feet of torque from a low 2,000 rpm. The engine has a rev limit of 5,500 rpm.

As of right now, it’s only in the all-wheel-drive version. As such, it gets a ho-hum EPA

for a potential front-drive diesel CX-5 getting just slightly better fuel economy, at 28 city, 31 highway and 29 combined, but no word yet on if and when that’ll be made available.

The mediocre diesel fuel economy, while expected given the

midstream shift from one emissions strategy to another

. The much more powerful CX-5

Mazda is taking pre-orders for the 2019 CX-5 Signature AWD with Skyactiv-D 2.2 starting now, at an MSRP of $42,045, including $1,045 in destination fees. We have to point out that this is a sizable jump in MSRP from a CX-5 Signature AWD with the more powerful turbo engine, which lists for $38,235 – a $3,810 difference in fact. Given the lackluster fuel economy and considerable decrease in power and torque, we’re concerned that the diesel may be a tough sell at this sort of premium. Regardless, the diesel CX-5 will be available in four colors: the standard Jet Black, or the more expensive Snowflake White Pearl, Machine Gray Metallic or Mazda’s signature