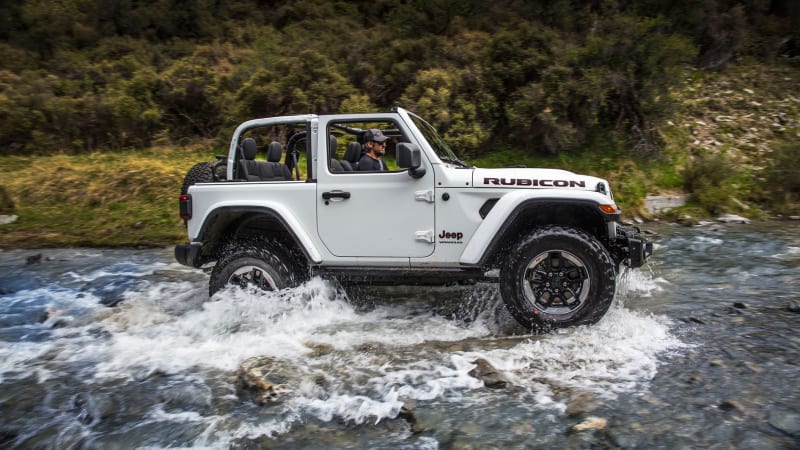 This week I drove a modern

Rubicon. It’s been some time since I drove a two-door Wrangler, and I had forgotten just how much fun they are.

I always say the four-door Sahara is how I’d roll if I were serious about buying a Wrangler, but after a cathartic morning drive with the soft top rolled back, I’d strongly consider the two-door variant. It’s a solid ‘commuter car, and it would be epic for camping, wheeling and trail stuff.

On the other hand, the two-door is generally unrealistic for family pursuits. A four-door has room for a car seat and more room for a dog. The two-door has an air of adventure; the four-door can feel like a conventional SUV. In an unscientific Twitter poll,

54 percent of you agreed

with my first impulse, favoring the four-door.

Spent some time in the 2019 @jeep Wrangler Rubicon two-door. Forgot how much fun the two-door is! Caffeinating and pulling together a column… @therealautoblog pic.twitter.com/LkJlsfO46T

This week I’ve been testing a

-colored 2019 Wrangler Rubicon as seen in the Tweet above. The exclamation point isn’t a typo, that’s the name of the

paint color. This Jeep is bright green, like the rum cocktail loaded down with lime and mint. With the big wheels and offroad gear, it looks like a Hot Wheels toy. That’s a good thing. If you don’t want this style, pick a different color (I like my Wranglers in subtle tones like gray, green or khaki). Improbably, I pulled up next to a four-door Wrangler also wearing Mojito! on my way home.

Worth noting, you can’t get the turbo with a manual, so if you’re speccing things out, it’s really a $3,000-add-on. You do get a nice fuel-economy gain to the tune of five mpg in city driving with the turbo/automatic combo compared with the V6/auto pairing, which is something to consider if you’re buying the Wrangler for commuting rather than crawling. And this is a nice slash line for the turbo: 23 city/25 highway/24 combined.

The 2.0-liter turbocharged four-cylinder engine with direct injection is rated at 270 hp and 295 lb-ft of torque. It’s an intriguing option over the standard

, (285 hp, 260 lb-ft). The four-cylinder is not as powerful but it has more torque lower in the range, which is noticeable. Like most turbo four vs. NA six comparos, the four feels like the stronger engine in the Wrangler. You won’t miss the 15 fewer ponies, but you’ll enjoy the 35 additional pound-feet of torque on the road. Offroad, I think I’d prefer the linear performance and familiarity of the V6. Plus, the turbo recommends premium, which is something to consider.

The short wheelbase and light steering — you’ve still got to put your arms and wrists into piloting a Wrangler — makes for an interesting experience. You can turn quickly and sharply, but at times it feels like you’re floating on these offroad tires. The smaller cabin naturally makes for a more intimate ride, with or without the top covered. Like I said, peeling back the cloth top and putting the windows down is good fun, even on a breezy 64-degree June morning shrouded with overcast skies.

Ultimately if I were really dropping money on a Wrangler, I still would land on a four-door. If I’m buying a Jeep, I want to be able to drive it every day. And that means putting people, animals and stuff in it. It’s a tough call that would ultimately boil down to practicality. Or maybe I’d just opt for a

P.S. I did the Rubicon Trail in both variants eight years ago for a mid-cycle refresh of the JK. Piloting a green four-door with a manual transmission over the rocks, dirt and through creeks was such a memorable experience, I’ve always favored that version. That’s definitely how I’d go.