By doylestownauto on December 8, 2019 in Audi repair shop 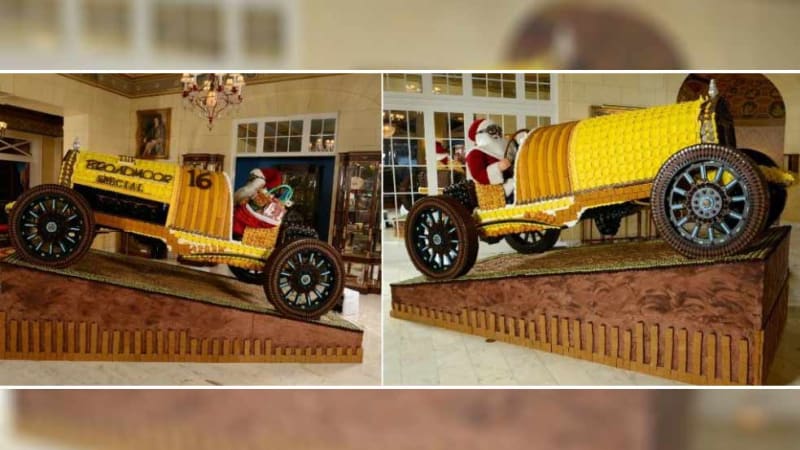 Fancy hotels love a big ol’ fancy gingerbread sculpture this time of year. Forbes Travel lists a few of them, the exhibitions including a 10-foot-tall streetcar in at the Four Seasons New Orleans and an 18-foot-tall lighthouse at Ritz-Carlton Bal Harbour. The Broadmoor, Colorado’s luxury resort near Pikes Peak, has been in the gingerbread extravaganza game since 1964 and lately put together some stunning creations. In 2017, the hotel’s pastry team built a 12-foot tall, 3.7-million-calorie gingerbread church, then followed that in 2018 with a 13.5-foot-tall replica of the original 1918 resort. This year the dimensions grow but in the horizontal, and the subject matter into our wheelhouse, with the resort’s pastry team creating a 14-foot long replica of The Broadmoor Special, a 1918 Pierce Arrow Touring Car converted to race in the Pikes Peak International Hill Climb eight times through the 1920s.

A gent named Spencer Penrose built the Pikes Peak highway to the mountain’s summit, founded the hill climb race in 1916, and the resort that opened in 1918. To whip up interest in the ventures, he gave the The Broadmoor’s master mechanic, Angelo Cimino, and his chauffeur, Harry McMillen, his Pace Arrow Touring Car and directions to turn the limousine into a racer. The car that became known as the Yellow Devil climbed the 14,433-foot mountain eight times from 1922 to 1932, finishing fourth in 1926 and 1930. The hotel submitted the Yellow Devil to a two-year restoration in time to run the race’s 100-year anniversary in 2016. The car is now on display in the hotel’s Penrose Heritage Museum.

The Broadmoor’s done us all a favor by providing the recipe for the 14-foot Yellow Devil gingerbread replica. It took the 15-strong pastry crew two weeks to create, leaving any amateur chef plenty of time to get another one built before the holidays. Sourcing the recipe’s 375 pounds of all-purpose flower, 482 pounds of sugar, 300 pounds of dark chocolate and 700 egg whites shouldn’t be difficult. Locating the more arcane ingredients like “10 lbs of Joy” and “2 Magical Wood Workers” could prove a tad more challenging.