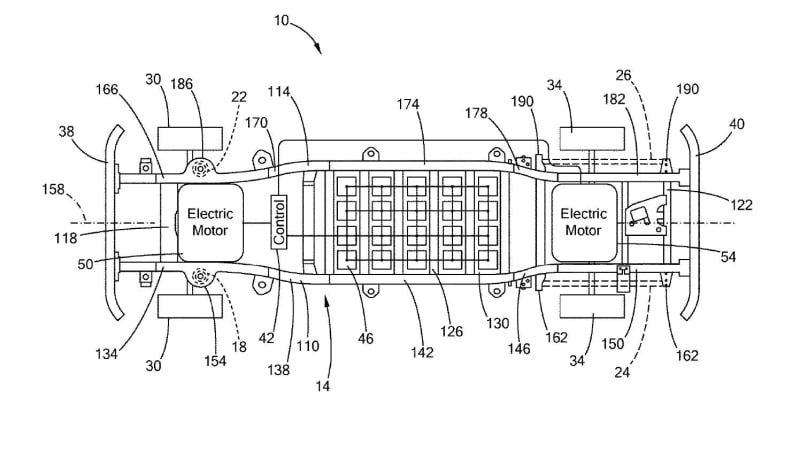 A user on the MachEClub forum discovered that on May 16, 2018, Ford applied to patent a “Body-on-frame electric vehicle with [a] battery pack integral to [the] frame.” The diagrams included in the patent application change show a divergence from the typical skateboard EV chassis we’ve seen in the past, instead retaining a key component of traditional pickup truck ladder-frame chassis.

The new EV paradigm is to place a single, consolidated battery pack between a vehicle’s frame rails and the front and rear axles. Rivian uses this method for its R1T pickup and R1S SUV. In the Ford patent, the EV chassis retains a pickup’s cross-members and divides a monolithic battery pack into a series of battery modules. As worded in the patent, “The plurality of power storage modules are disposed within a plurality of the compartments” created by the cross-members. The battery packs would be supported by a plate underneath that’s welded or bolted to the frame rails.

One of the drawings shows as many as five cross-members housing four “power storage units” between the rails, and that doesn’t include other cross-members used to support additional components. The ladder chassis in the current F-150, for instance, counts eight cross-members.

According to the application, this build process pays off in several ways. The huge weight of a single, large battery pack increases shear stress on a frame, alleviated by designing a heavier, stronger frame that can cope. Ford’s patent request says the “The added shear strength and structural stiffness provided by the bottom plate and center cross members can also permit the gauge or wall thickness of the left and right frame rails to be reduced from that of a typical body-on-frame vehicle.” While that would mean a lighter, less expensive set of rails, it appears to us that the metal saved in the rails is simply being moved to the metal used for the supporting plate.

The automaker says NVH could improve with this setup, since it does away with the large container – the independent, rectangular structure housing the battery and ancillaries – slotted in between frame rails. The patent app claims “The connections between the battery assembly and the separate vehicle frame can provide pathways for noise, vibration, and harshness” with a monolithic battery, whereas with discrete modules, “the stiffness added by the bottom plate and center cross-members… provide reduced noise, vibration, and harshness.”

Without doubt, having more freedom with battery placement thanks to smaller packs would provide more manipulation of balance, and individual packs could make it easier to address battery issues.

The patent application was filed 15 months before Ford invested in Rivian. It doesn’t mention the battery-electric F-150, so we can’t know if this is the kind of chassis to expect when the EV pickup shows in a few years, but it wouldn’t be surprising if so, seeing as how it provides a transitional step in manufacturing and design from the techniques Ford’s employed for decades.