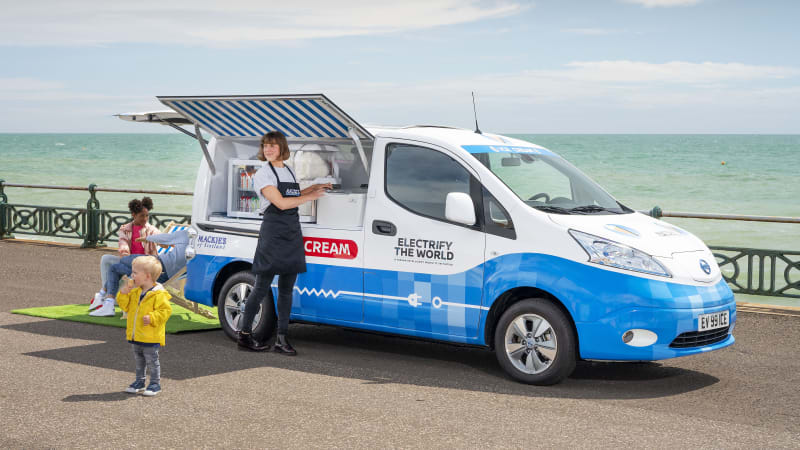 When it comes to reducing carbon emissions and other air pollutants, we typically focus on consumer vehicles, but they’re far from the only vehicles that could use improvement. In particular, low-speed local vehicles such as buses and delivery vehicles could be excellent targets for electrification.

chose a more fun example, though, in the form of an ice cream van based on the

The van uses the same 40-kWh battery and powertrain from regular e-NV200 vans. But from there, it’s been outfitted with a swing-open panel on the side to access shelving, freezer space and a soft-serve ice cream dispenser. The ice cream salesperson won’t have to worry about eating into range while running this equipment, though. The van also features Nissan ROAM portable battery packs made from

this battery pack design coupled with a lightweight camper

, and Nissan has announced it will put these packs into production for sale this year. As an extra bonus, there are solar panels mounted to the roof to keep things topped up.

It’s not just the van that’s environmentally friendly. Nissan partnered with ice cream maker Mackie’s of Scotland that prides itself on running its facilities on solar and wind power. So the ice cream itself is mostly free of greenhouse gases. We say mostly because there are still methane spewing cows, but there’s not much to be done about that. And as an extra detail, Nissan made sure the van was equipped with bottles of water in biodegradable containers. It seems the future of ice cream vans is looking pretty bright.