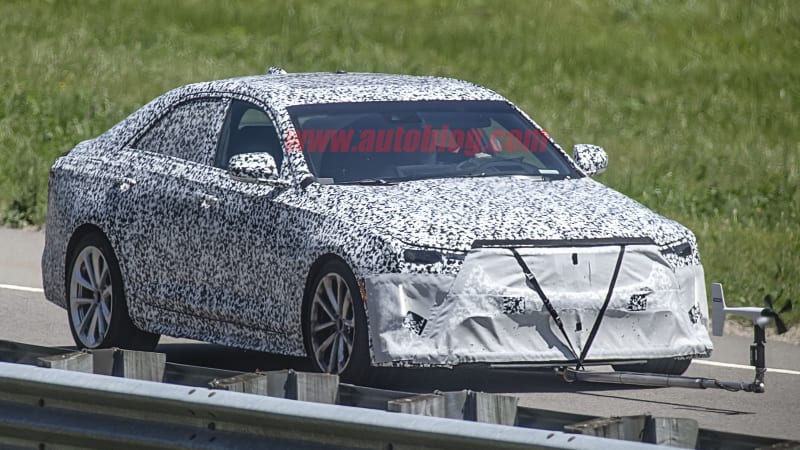 already teased us once with the

at the Belle Isle

, but these photos are still the best look yet at what’s next for the Cadillac V-Series. The car we’re looking at in heavy camouflage here is a high-performance CT4, but we don’t really have

to call it at this point. Cadillac hasn’t said, so it could be anything. We’ll just refer to it as the faster V, as it’s certainly looking a bit more racy than the

While the styling isn’t drastically different from the CT4-V already out there, the front intake and openings look deeper and more aggressive. The middle, raised section of the hood is a little taller and the whole front-end design looks a lot like the one teased in Belle Isle. This vehicle even appears to have the same mirror design as the faster V.

The side sills, quad exhaust tips and wide rear tires lend this prototype an aggressive look, but we did note that it doesn’t have the big ducktail spoiler we saw teased previously. Maybe Cadillac is trying to keep a low profile while testing. A keen eye will notice a wild apparatus attached to the front, which would serve as a great jousting pole if you were into that kind of thing.

We don’t know exactly when Cadillac plans to introduce the faster V machines, but we wouldn’t doubt if it happened before the year was out. The

didn’t look wholly different than the pedestrian versions of those cars, and this prototype indicates

may follow a similar pattern this time around. All will be explained from

soon, but for now, we wait.