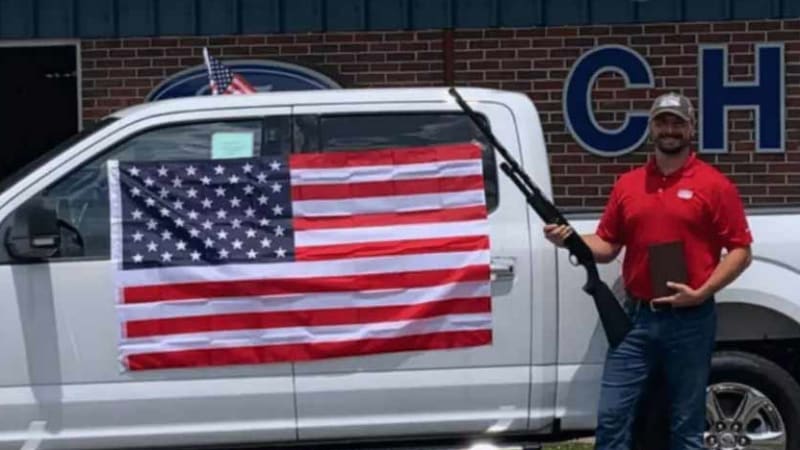 in the tiny rural town of Chatom, Alabama, kicked off a promotion last week in honor of the nation’s independence on July 4. Meant to run until July 31, any customer

during the “God, Guns, and Freedom” special would get a Bible, an American flag, and a certificate redeemable for a shotgun. Buyers weren’t obligated to take any of the items, but so far, buyers have.

that in three days “we sold five cars. In a small town, business is booming.”

Chatom, about 62 miles north of Mobile near the Mississippi border, has just over 1,200 residents. Palmer noted the promo was “just showing support for our local community.” Seeing that all three items are legal and representative of a town where people “lean on their religious beliefs, their pride in America and … love to hunt,” hey, why not? Palmer made sure to clarify to

that “Anyone that doesn’t 100% agree with what we’re portraying, we’re not trying to force our beliefs on anybody. We respect anybody that disagrees, no matter how vehemently they do.”

touting the promotion, which had blasted past 60,000 views in just a few days. A statement now reads, “

has asked us to stop running the

. They manufacture the products we are franchised to sell, so we are complying with their request.” The dealership says it “will fulfill all commitments we made to our customers.”

Also of note, the franchise wasn’t simply throwing shotguns into cars headed off the lot. Every purchase came with a certificate redeemable at nearby gun stores that had partnered with Chatom Ford. The gun store would run a background check on the car buyer, and if the check came back clear, the bill of sale could be redeemed for the shotgun.

Chatom Ford said its intent was to give “a small gift to our valued customers and an opportunity for us to celebrate our independence.” The dealership likes to run a new promotion every month, and there’s still time before July 4, so they could be right back with another special. And since the

says Ford only requested the advertising to stop, who knows, you might still be able to redeem the offer if you can keep quiet.