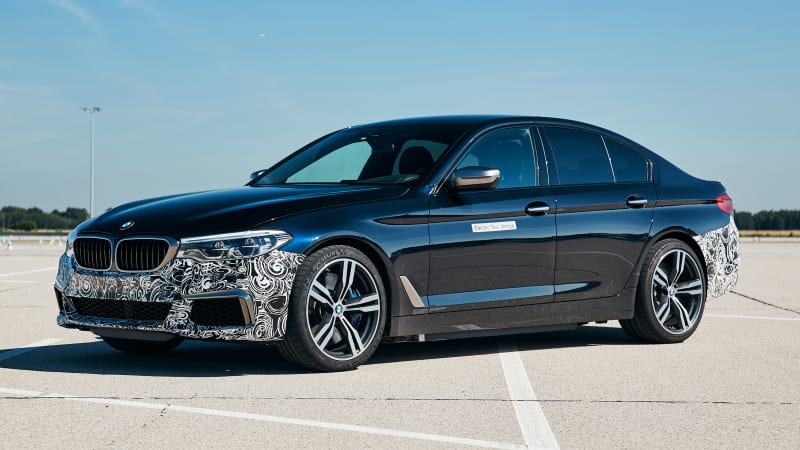 is unquestionably the highlight of the company’s big “Next” conference. It looks like a modern

and has a 600 horsepower

powertrain, so how could it not? Yet

also revealed something with an even more powerful and potentially more interesting powertrain, and it was wrapped up in

It’s called Project BEV, and its a development mule BMW created for experimenting with electric powertrains. And what that’s resulted in is a fully electric 5 Series with 711 horsepower, which is 111 more horsepower than

or the aforementioned M Next concept. Power comes from a trio of electric motors. One is mounted up front to provide extra traction as needed, while the other two are paired at the rear, one for each wheel. Unsurprisingly, this design allows for active torque vectoring that could make for some impressive cornering ability. And with all-wheel drive and 711 electric ponies, BMW says Project BEV will hit 62 mph in under 3 seconds.

There are a couple other interesting tidbits about Project BEV, such as the fact that BMW got everything packaged into the 5 Series without taking up passenger space. That’s seriously impressive that BMW could get three motors and their accompanying batteries, cooling equipment and more stuffed into a production car that was never designed for it in the first place. Granted, BMW doesn’t say anything about cargo space, so the trunk may have lost some usability, but its impressive nonetheless. Additionally, all three motors were built without using any rare-earth metals. The company notes that the upcoming iX3 electric

Naturally, this being a research vehicle, we’ll probably see various production vehicles take advantage of some of the technologies demonstrated, but at more modest performance scales. We sure hope BMW does decide to put a version of this super-powered three-motor powertrain into a production car, though, because it sounds like a blast.